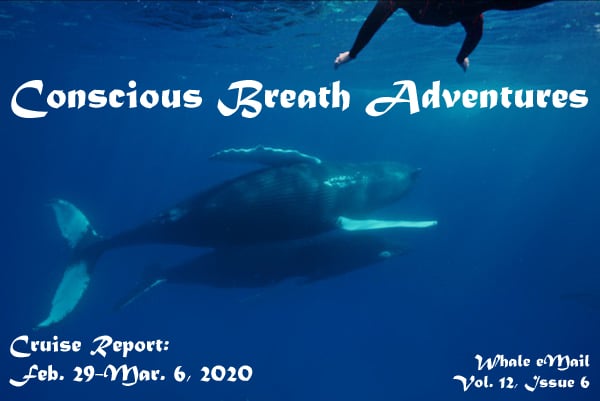 First Impressions from Our New Intern

We’ve added a new member to the team, an engaging young lady named Cat who is joining us to help with a variety of tasks both in and out of the water. Over the years I’ve happily written many a Cruise Report, I thought that for a change you might like to see it through new eyes from a first-timer’s point of view. In this post I’ll let her do the talking but will pop in from time to time to add a few details.

Thank you for reading!

What Does Cat Think?

My name is Cat and I am the new intern with Conscious Breath Adventures aboard the M/V Sea Hunter. I am an English marine biologist, videographer and drone pilot, and to work here in the Dominican Republic with Capt. Gene and the whales is a dream come true. I found out about the internship through a friend who had worked with Gene previously, who forwarded it to me knowing how much I love whales, and how passionate I am in developing a career in conservation, using the medium of moving pictures as a tool of inspiration.

My first week on the Silver Bank was the best introduction I could have possibly hoped for. When I first arrived at the dock, I met Gene, Ben and the previous week’s guests, who were talking excitedly about their life-changing week in high spirits. In a blur, they had departed, and the incredible crew had made all the preparations for the new guests – including ten returning guests – of which two were celebrating their SIXTH trip with CBA! I was honoured, and maybe a little intimidated!

Unfortunately, as we headed out to sea, we got hit by a bout of bad weather that kept us out of water longer than we would have liked. We weren’t able to get out on the boats to swim Sunday and Monday, but we were brightly informed by not only Gene and Ben, but every single returning guest, that nothing could stop us from having a great week, and it would all be forgotten when we found our first whales. Nothing could have been more accurate. 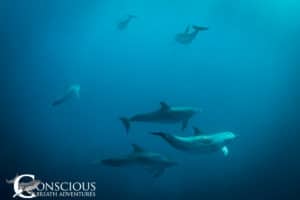 Once we did get on the water on Tuesday there were so many whales surrounding our boat that we had trouble deciding which to swim with! In the afternoon, we found another mother and calf with an escort. We thought this might be a good group and started to track them, which means moving parallel at a respectful distance away from the whales, watching their behaviour and timing their dives, so we can get an idea of how they are feeling and whether they might be interested in swimming with humans. However, during this interaction, we were suddenly interrupted by a pod of dolphins. At first, we chose to keep tracking the whales as we thought the dolphins would be too difficult to see in the water- but they insisted. They followed us for more than twenty minutes, riding the bow and the waves either side of the boat until we gave in. We managed to get in and see the dolphins underwater for about five minutes- something Ben said he had never done before in five years working with CBA. What a lucky group we are!

[Gene’s Comments: I wasn’t on the boat with Ben and Cat and their boatload of guests when they saw this pod of dolphins. Ben took a few photos but I have to confess that I am not sure what species they are. They were not bottlenose, or pantropical or Atlantic spotted dolphin. If you can identify the species please send us a note. Thanks!]

After that we spent the last two days of the trip in a state of permanent, overwhelming happiness, 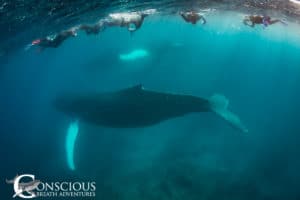 surrounded by whales and new friends. On Wednesday, we happened across a mother whale and her baby, with a male escort. It was almost like they were calling us into the water, mama whale sleeping sweetly at about fifteen metres depth, with the calf resting underneath her and coming up to the surface on cue, every five minutes. It was naturally curious and on some surface excursions, came to swing past us and see what on earth we were doing floating in the water. The whole time, the escort was circling below us, examining us in his own way, making sure that we were not dangerous. We were in the water for about forty-five minutes (which of 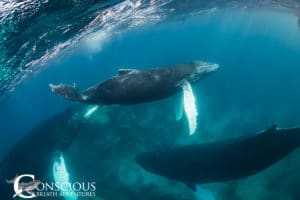 course felt like about three!), simply basking in the beauty of the whales, admiring their pleats and gazing at the tubercules along the pectoral fins and across their heads.

[Gene’s comments: What really made this encounter so special was where it happened. We were up in the shallowest, most coral-filled part of the reef. A swim in this area is a rare treat and wonderful because the shallow water means the whales are near the surface for great viewing. And the many coral heads make an interesting backdrop. Sometimes resting whales don’t like the shallows and the rocks but these three didn’t care at all, only twisting or moving from time to time to avoid drifting into the rocks. Plus the escort kept creeping up behind and beneath us, taking several minutes to slide by in slow motion directly below – see the photo above. It was fantastic.]

That evening we all excitedly talked about how this was going to be the best day of the trip, and nothing could top this. Gene wisely stood by and advised that you can never guarantee you’ve had the best day until you’ve completed the trip. And the man knows what he is talking about. In not only the best day of the trip, but one of the best days of my life so far (I promise you, I am not exaggerating), I headed out on the boat with Ben and his team at 830am on a search. Around lunchtime, all of a sudden, we got a call on the radio from Gene. ‘You might want to think about coming over here… we are seeing something that could get interesting.’ We had just had a really lovely swim with a mother and calf, who had both been very docile and sleepy- which means that we can really take in and appreciate the magical situation- and at first we figured we should stay with our snoozing pair. Then we had another call on the radio. ‘You reaaaaaally might want to work your way over here. It’s worth the journey.’ And so we did.

We arrived to four adult whales- one female and three males vying for her affection- playing at the surface. They had been there more than an hour before we arrived at the scene, and they clearly had no intention of going anywhere. They were pec slapping, twirling, diving, blowing at the surface, showing a little tail with every dive and coming straight back to the boats at the surface for more attention. They loved us. With the boat turned off, we floated, watching them for a long time, just appreciating them from the surface. Eventually they settled enough that Ben decided we could safely slip in for a closer look. I think the whales wanted a close look just as much as we did. For hours we rotated between spectating the whales from the boat and hopping in the water, making sure they had space to themselves. Every interaction was better than the last.

The female was showing off for both us and the boys, waving her pec fins in the water and spinning around, occasionally swishing her tail to create a trail of bubbles for us. My highlight was when she turned on her back and slowly floated to the surface. I was close enough to see one giant eye, before she got to five meters away from the surface of the water, she closed her eyes and streeetched out, fins up, back arched. She was enjoying the sunshine! It was mesmerizing, and somehow amongst all of this, a fifth whale appeared. We ended up hovering over a giant coral head, five whales

circling around us, dancing for us, enjoying our company as much as we did theirs, until we realized it was already 16:15 and we had only snacked on pastries and fruit on the boat all day! Extremely reluctantly, we decided that the whales might want some alone time. In desperate need of nourishment, we waved goodbye to the gentle giants that had made our whole week, before heading back to the inevitably delicious boat food.

Though the whales were an undeniable climax of the week, even without them, I have had one of the happiest weeks of my life. Gene and Ben have been perfect, teaching me the ropes and giving me advice and fun stories. The boat crew has been not only friendly and welcoming, but also endlessly hilarious, and some of the most entertaining and thoughtful people I have 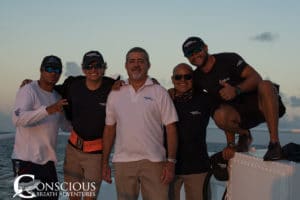 ever met. Everyone has spent every evening together on the top deck for sunset, and the guests have had so many interesting stories of inspiring wildlife encounters elsewhere in the world- and in a lot of cases, of previous adventures on the Silver Bank! Getting to know everyone has been a delight and I am already excited to see everyone again, hopefully soon.

I am one week down out of five weeks total on the Silver Bank, and I think that it is safe to say I am already dreading the end of the season- I never want to leave! 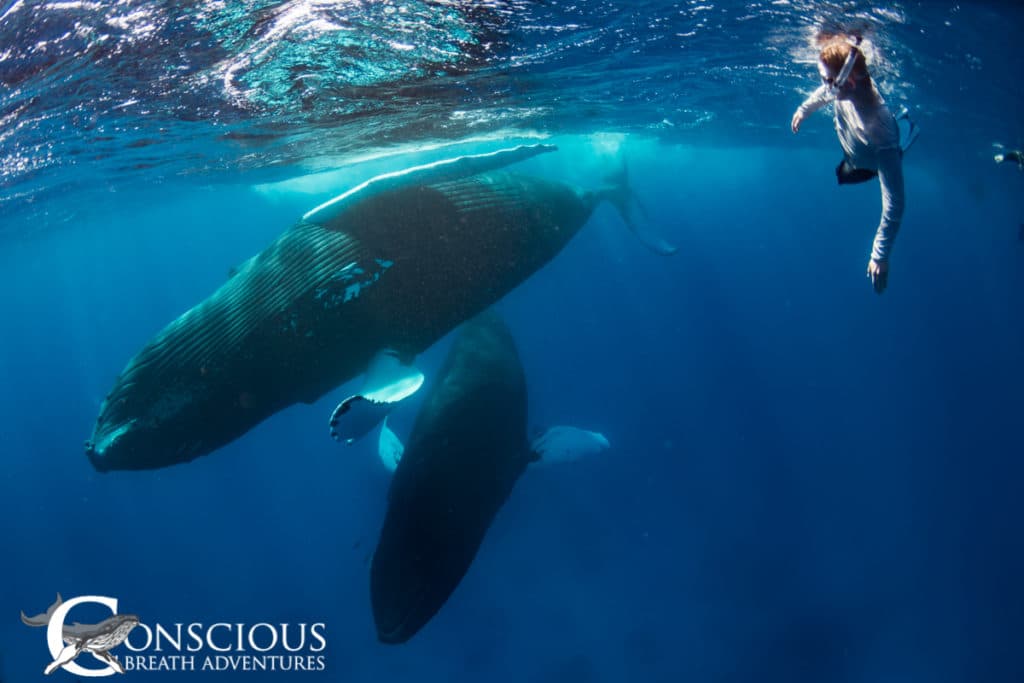