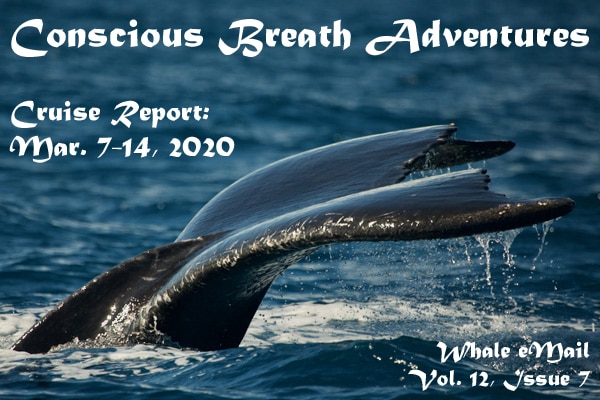 Welcome to Cat’s summary of another great week on the Silver Bank!

After six more days at sea, I can now say with absolute certainty that this is the best internship on the planet. I have never been anywhere like this before, and never had so much fun at work. As I write this, I have three trips left to go and my only request would be for time to go a little (read: a lot) slower. 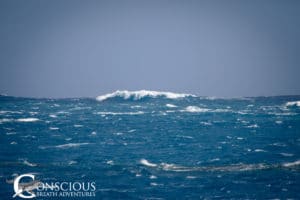 A bout of bad weather pushing through delayed our first trip into the water, which gave all the guests a great opportunity to get to know each other- there were three marine biologists on board this trip, not including us Conscious Breath Adventures staff members! It was lovely to talk about different conservation efforts around the world and chat about the way different whale populations and species behave in different locations.

We ran our first trip in the pouring rain, and I loved every second- I think we all did. But it was chilly, so to avoid getting cold we tried a few whale-summoning dances and crazy boat exercises. We also passed around a lot of snacks, courtesy of our chef, Luis, who has never cooked anything in his life that wasn’t delicious (he’s been chef aboard for 21 years). The whales also seemed to enjoy the weather and were throwing their tails around as if they were in an ocean-wide dance party. 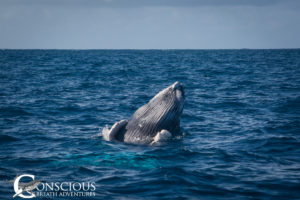 We even spotted multiple breaches, and my favourite part of the surface action was a double tail throw only about 20m from our boat! There were multiple times where we had the boat turned off and the whales came extremely close to check us out – it was almost as good as being in the water with them!

That said, swimming with the humpbacks is admittedly more magical. This week was my first week ever truly hearing whale song and it was mind blowing. From the moment we pulled up near the whale, Ben had us all curled over the deck with our heads against the side of the boat. This has the same effect as holding up a cup to a wall- the sound reverberates more, and you can hear better. We listened, amazed, for about ten minutes, through the boat and plugged in to the hydrophone, before Ben said we should hop in! The experience was indescribable. From the moment we were in, you could feel the vibrations of the whale song through your whole body. We couldn’t even see the whale yet and we could already feel him around us! Before long, the giant white pecs came into view and we were able to watch and listen as the male slowly came to the surface, breathing and serenading us, before gently floating back to depth again. We watched in awe as he did this about three times, before switching out with Gene’s group so that they could have the same opportunity.

One of the things I like most about the whales here in the Dominican Republic are their characteristic colourations. Each population tends to have a common pattern between individuals in the populations, and in this case, it’s the pectoral fins. Every whale I have seen here has bright white pectoral fins. It is fascinating to see the contrast of the long dark bodies against their giant light fins. It is also greatly helpful, as it is much easier to spot from the surface.

Following our singer swim, we had a very busy day! 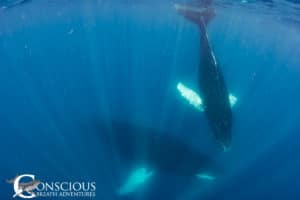 I am sure the whale must have been singing about how great it was to swim with us, as we had some very interactive whales all day. My favourite swim was in fact the shortest. We had a mother and a calf, the calf of whom was the smallest humpback I have ever seen! We were only with them for about three or four minutes, but when the calf surfaced it felt like it was aiming right for us, before turning away at the last minute to show us its lovely tummy with a slow motion wave from the pectoral fin to boot. After that, the pair were on their way to adventure through the ocean, 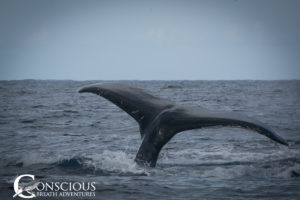 and we spent the rest of our day with two more sets of mama and baby, on top of a lot of surface action from several rowdy groups that seemed to be in every direction we looked!

It is truly a delight to interact with these individuals every day, and it makes my heart happy to see that they seem to be almost equally interested in us when we are interacting. Almost every swim, they have come close enough that you can see the whites of their eyes, and they are clearly scanning the group curiously, trying to understand what exactly we are, and why we are so small! I am falling more in love minute by minute out here and I cannot wait to see what the next trip has in store! 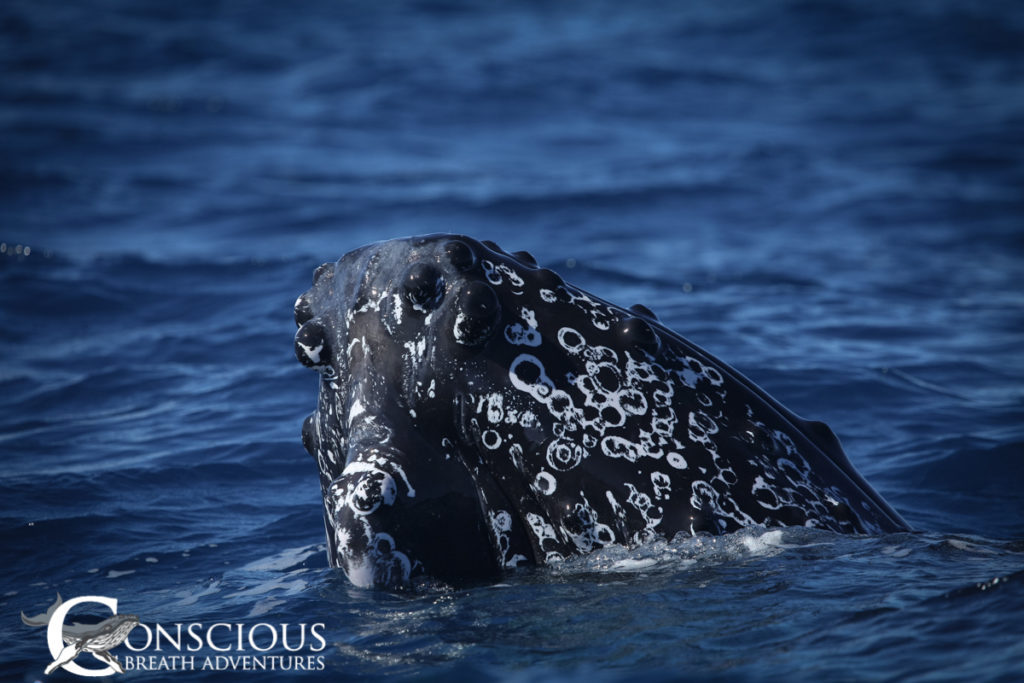