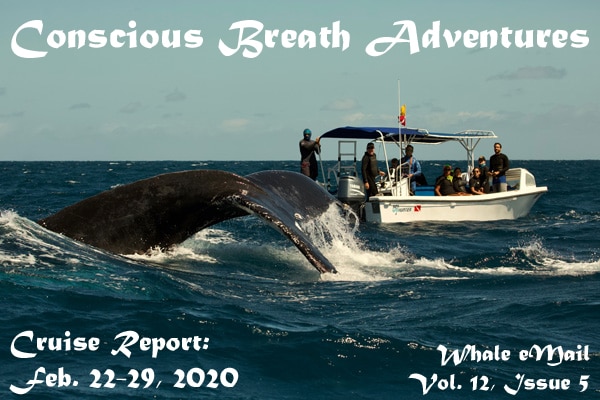 This week wrapped up the first half of our 2020 Silver Bank humpback whale season and this weekend is the midpoint for great whale excitement.

The humpbacks come to the Silver Bank for different breeding purposes. Single females come here to find a mate and pregnant females come to give birth here or somewhere near here and to nurture their young before the migration back to their summer feeding grounds. The single males come down with the primary intention being to find that single female and mate. 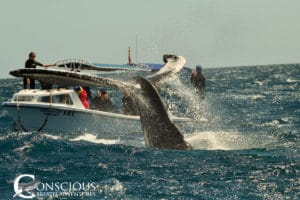 But there are dozens and dozens of males in the area who have the same mission. But because many of the females are with young, it is definitely a situation that favors the females as there are more males than prospective mates.

So the competition can be very fierce. And it seems there is a bit more testosterone in the air this season because the competitive “rowdy” groups we have encountered have been really tearing up the ocean, even more than usual.

This week we saw several rowdy groups and witness some of the highest energy fighting ever, with tremendous spyhops, lots of threat displays and posturing, and water-flinging 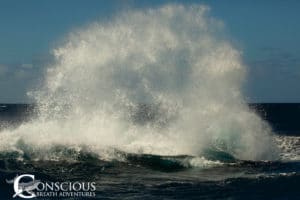 This week we saw several rowdy groups and witness some of the highest energy fighting ever, with tremendous spyhops, lots of threat displays and posturing, and water-flinging maneuvering.  Watching a group of rowdies on the job is one of the most exciting experiences you can have with the whales short of being in then water with them. It involves hundreds of thousands of pounds of raging male humpback and the behavior can last for hours, not minutes, leaving whale watchers feeling a bit tired, too. 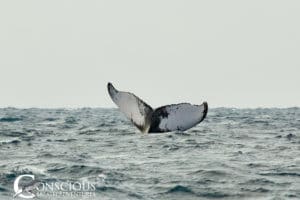 This week we also deepened my connection to my favorite whale, Mystery, who we last saw on Week 2 (read that story here). And just like that week, she showed up the very day after I’d told our story to the guests during a presentation on Tuesday night. That is the third time that has happened! On Wednesday morning we were loading into the whaleboats when a passing whale fluked up close by. And there she was again! Following along moments later I was able to capture the confirming image before she carried on down the reef. 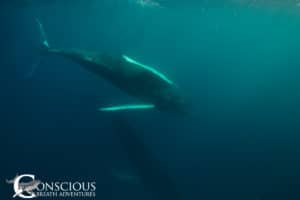 In the water one of our highlights was a swim with a great male/female pair who shared with us some of the famous humpback curiosity that makes them a favorite of whale watchers everywhere. It’s great to have a couple big friends like these.

And we saved the best for last with an exhilarating swim with a trio of young males. This in itself was unusual, usually if there are more than two males a fight breaks out. But once in a while multiple males will pal around like a bunch of buddies out for a good time. 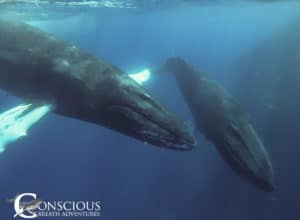 So it was with this trio, where one especially was super curious about the boat and swimmers and danced and rolled, stood on its head and twisted, all while looking us straight in the eye.

It is impossible to adequately put into words what it is like to have a 30’ whale come to dance with you. But one of our guests later mentioned how she was having problems with water in her mask only to figure out it wasn’t seawater, but tears. It is not the first time that has happened out here!

It seems that the world is spinning a bit out of balance these days but spending the week unplugged and disconnected from the data stream gives us all a rejuvenating chance to reconnect with something far more powerful. We are all fortunate to be here.