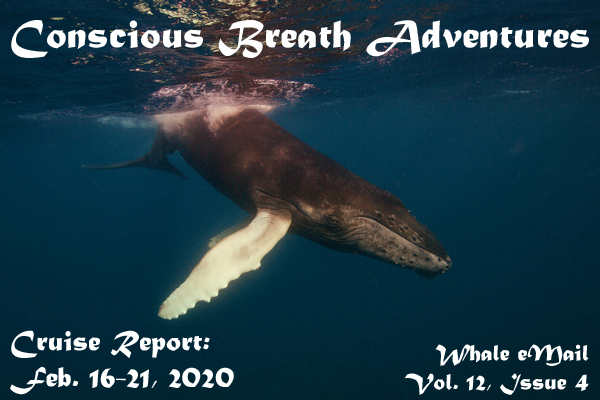 One of the hardest parts of the Silver Bank experience to explain to people is that it is definitely much more than “just” swimming with whales. Again this morning I had several of our Week 4 guests mention that the big surprise to them about the trip was the level of camaraderie and friendship that comes from the shared experience. Sometimes I think it is like one of those company retreats where completing a rope course or learning to rock climb together is a team-building experience. And so, in a way, this is, too.

Guests come aboard with a wide mix of skills. A few are excellent divers or freedivers, many others are beginner snorkelers. A few may have been out with us in the past but most have never swum with a whale before. Although hopes are always high, they really don’t know just what to expect out of the adventure.

So we take this group 75 miles offshore, we are all in the same boat, and throw them in the deep end to metaphorically learn how to swim, and literally how to swim with whales. At the beginning there are often some challenges as people adjust to the marine environment, get comfortable with their equipment, learn the skills we teach and then put them to use. The first day it can feel like we are coaching a little league team: we tell the team how the game is played, and a touch of 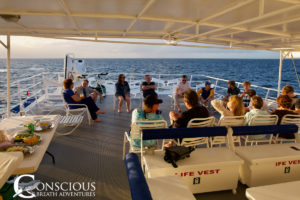 harmless mayhem ensues. But as each humpback whale interaction occurs, guests quickly become more comfortable with their place in the environment, understand how and why the techniques work, keep practicing, and are rewarded with indescribable results. By the end of the week we have a finely tuned team of top-notch Silver Bank whale swimmers.

It is an Empowering Experience

For some the idea of jumping into 80’ of water is intimidating. But by the end of the week they think nothing of doing exactly that – with a humpback whale or two! It resets some personal boundaries. And this is all before adding in the potency of an interspecies interaction with a massive intelligence that we just can’t fully understand. The personal growth and shared whale interactions are bonding experiences. Guests bond with the whales, and with each other, and many friendships have started here in this special place. It enriches the entire experience in a way few anticipate.

And so it was this week where a big family group joined a bunch of other whale guests, including a handful of first-timers plus a few returning guests.

One of the first-timers was a special guest, BBC documentary filmmaker Tom Mustill, whose latest production, “The Whale Detective”, was just aired in the US about six weeks ago (watch the preview here). In the documentary Tom investigates humpback whales after an unprecedented experience in Monterey Bay, California in 2015. We also had aboard returning photographer Jodi Frediani, who is now a friend of Tom’s after being one of a handful of folks to document Tom’s experience in her home waters. The feature is suspenseful, very informative, humorous and thought-provoking at the same time as it shows some of the top marine mammal experts trying to explain the whales and their affinity to them, too. It should be on everybody’s watch list.

Into the Water They All Went!

Our highlights included a very good singing male humpback who rewarded us for our discipline. On that morning there were a lot of whales around. That made it very tempting to move from group to group but if you want to actually swim with the whales, not just watch, patience pays. So after watching hither and yon, finally a solo whale popped up just nearby and there was our singer. We had a bone shaking swim in the song of this powerful whale. 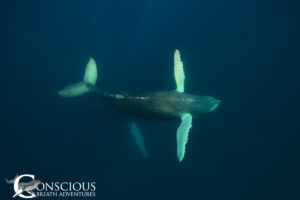 On another day we had a golden interaction with a mother and calf which were resting in the protected waters behind the reef. This was one of the most playful, and one of the largest, calves we’ve encountered this season. He was a big baby boy and was a bit shy and reserved at first but quickly gained confidence. Then he started twisting and spinning and swishing down the line of swimmers, looking everyone in the eye. What a mischievous little guy!

This week we also had not one but two exciting interactions with a pair of adult whales. We had great swims on two separate days, with the two coming up just below and right in front, circling around everyone in the water before diving back down. It was fun to watch guests 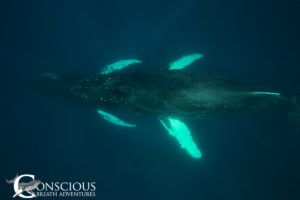 mesmerized by the whale on the surface in front of them, forgetting all about the second one rising below until I’d tell them to look down and HEY WOW THERE IT IS! Don’t ever forget when swimming with two whales that even if you are looking at one close by, the other is still there, too, and may show up even a little bit closer!

There was another element that made these whales particularly interesting. It was a male/female pair both days but each day it was the same male with a different female. This guy was getting around and the ladies seemed to like him. He certainly was attentive, and a big, handsome fellow at that.

Toss into the mix some spectacular 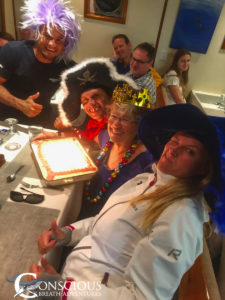 topside humpback behavior, morning yoga to release some whale energy, a green flash and an unprecedented three birthdays this week (with Happy Birthday sung in all four available languages each time), and it was a heck of a good week.

We can’t wait to see what comes during the next!

Until them I hope you have a wonderful week,