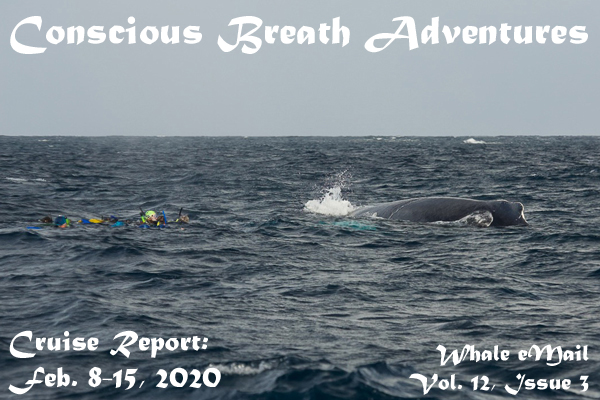 We started this week by welcoming back aboard Ben Vieyra, our in-water guide who typically covers the second half of the season. But our new mothership offers us a few more resources so Ben was able to join us a few weeks early to extend his stay on the Silver Bank this season to a full eight weeks. Welcome back aboard, Ben, it is great to have you here! So now, in addition to the M/V Sea Hunter’s standard crew of nine, there are also three members of the Conscious Breath Adventures team in place, too. That is a lot of great support for our twenty whale-loving guests.

Our guests this week included a large group of the most upbeat and happy folks you could ever meet, here for a journey into their most sacred spaces. From Sweden, Canada, Switzerland, Belgium and elsewhere, they just radiated positivity. The group leader was here on the Silver Bank for his eleventh time, but after a hiatus of nine years or so. It was great to welcome him and his folks back to the Dominican Republic, we’ve missed them. The remaining guests were Americans who were warmly welcomed by everyone and everything, all part of a big whale-family. It was a lot of fun (as usual, click images for a larger view). 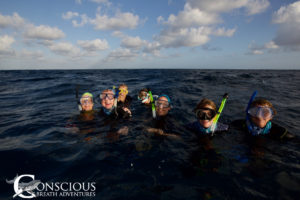 Now, every week has its highlights and you never know what they may be until the week is over. But sometimes you know the moment an event occurs that it is an experience that you will never forget. That is how it was for us this cruise and it happened that way for all of us on two different occasions.

The action started less than two hours after our arrival to our mooring Sunday morning. As we were all settling in and the guests were getting oriented, Ben rushed in to announce that a couple whales had passed close by the mooring at the front of the boat. But as we stepped outside to have a look, the two whales were now at the stern, floating just behind, watching us looking for them.

It was the start of an exhilarating half hour. The two whales, a male and female, spent their time either floating closely behind or beside, or swimming slow close laps around our mothership, a very popular whale watching behavior called “mugging”. The female was flirty, sometimes rolling upside down to interact with the boat, while other times they both seemed to be watching us as much as we watched them. All our guests followed them back and forth from stem to stern and back again, marveling at the immense size of the male. The M/V Sea Hunter is 115′ (35m) in length and this guy was easily a third of that, a very impressive whale! Lucky for us conditions were good and I was ready and able to capture drone video of the whales mugging the boat and guests. In all the years I have been coming to the Silver Bank this is only the third time we’ve experienced anything like this and none were as long as this one. It was simply thrilling. You can watch the best five minutes of the phenomenal experience at the bottom of this post. I can’t help but wonder what the whales were thinking.

But that was just the start

On Monday morning, CBA guides Jeff and Ben found a singing male humpback, a powerful vocalist that was a big star in his own right. He was stationed in relatively calm and shallow water behind the reef, singing almost twenty minutes a cycle. He was very loud, positioned facing downwind so that when our guests were facing upwind in the water, it was like they were in place just in front of a giant PA speaker. It was bone-shaking and so loud that, even on this windy day, you could hear him plainly from the deck of the whaleboats. When he surfaced to breath, he came right up next to the swimmers, still singing, and settled back down just a couple body lengths away, completely unimpressed by our presence. But we were all enthralled by his! I was ready again and was able to use our Aquarian Audio hydrophone to capture three recordings of five minutes each. He was booming so loud that he sometimes spiked the recording levels, which hardly ever happens. You can listen to one of the recordings here, click the button to play, and I also used another recording as a sound track for the drone video at the bottom, too (for the best listening experience use headphones or amplify through a stereo system).

These were the whale highlights of the week but not the only great experiences. We also had two interactions with mothers that still had their 25’ yearling calves. These big baby’s have more than doubled in

size in the past year but they sometimes still act like they are a couple months old and 12′ long.

And on another occasion I was guiding my group into an encounter that I wasn’t expecting much from; it was a bit dark and I’d left my camera behind. And wouldn’t you know it but this mother and young calf made one of the slowest and sweetest close passes I’ve ever seen. The little calf rode up on mom’s knobby nose, looking intently at the swimmers as mom drifted up just in front of us, lifting baby to the surface. She then made a slow turn to our left, than a lazy u-turn back past us, drifting by so closely and so slowly you could easily see her grapefruit-sized eye rolling around as she looked us over, baby sweeping in for a closer look. I may not have the photo to show but the image will never be forgotten.

And there was more, but not all the action involved whales. Most mornings there was morning yoga and tea, a great way to start the day. And the crew was up to their regular fun, too, one night throwing a birthday party, not because it was someone’s birthday, but just because they had a cake! And Wednesday evenings are reserved for dancing in the salon, come as you are, and dinner under the stars seated at a 30’ table on the upper deck.

And so goes another week with the whales! The weather wasn’t always good to us, it was breezy, and some guests felt under the weather at times, too. But by the time we said goodbye at the end of the week it felt like a week of great adventure in the company of great friends.