Greetings and welcome to the third edition of our 2019 Cruise Reports, bringing you highlights from the week of February 9–15 that Conscious Breath Adventures and our guests shared with the humpback whales on the Silver Bank. If you have read our Reports from the previous two weeks you know the season has gotten off to a strong start, with lots of whales, lots of action, and lots of happy guests.

This week’s guests included some first-time visitors as well as an esteemed group of returning guests. During the introductions the first-timers were amazed to hear the stories of the Silver Bank veterans, some of whom were making their third or fifth or sixth trip, or nineteenth, and there was even one amazing whale swimmer who has been coming one or two weeks a year since 1998! I think some of the newcomers started to wonder just what they had signed up for but they would not have to wait long to find out. 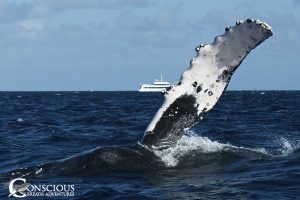 Along with the usual bounty of surface social behaviors and all around in-water interactions, what really set this week apart from the others were the whales we knew from the past plus the new ones we got to know this week. 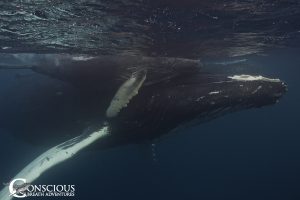 We started out quickly, building on the success of the last cruise when, on our first excursion out on Sunday afternoon, we once again sighted the stars of last week: the female whale we call Hook, along with her male calf and now-familiar escort.

Carrying on with last week’s action right where we left off, all our swimmers were able to share some high quality time in the water with the trio who were even more relaxed this week than last. It was a terrific way to start the week but made for a tough act to follow!

Hook and company were good company to all the swimmers on the Silver Bank for the early part of the cruise as our fellow operators also spent time in the water with them over the next few days. It is always great to spend time with the whales we know. 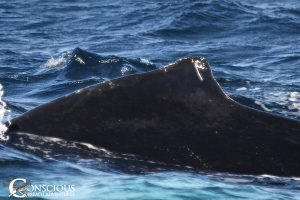 But it wasn’t just Hook that we recognized. One of our boats happened across another female we recognized with her calf. This female has a very distinctive marking on the left side of her dorsal, two circular marks from barnacles and a vertical scratch that together have a strong resemblance to a pair of opera glasses. We have seen and swum with this female in 2007 and 2011 when we named her “Aida”, after the opera of the same name. What made Aida so memorable during those prior interactions is her easygoing nature, and we have always had good interactions with her and her calf. This year she has a boisterous baby boy who delighted in showing off to our swimmers on more than one occasion, including Feb. 12 and Feb 14. 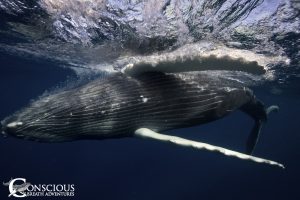 In addition to these familiar whales we also made new friends in a third mother and calf pair. This female was not one we recognized but as with Hook and Aida earlier in the week, we had extended interactions with her and her playful calf, another energetic male, over a couple days’ time. Between these three sets of whale is where we spent most of our in-water time during this excellent week of whale-swimming and we will be watching for any and all of them again in the weeks to come. 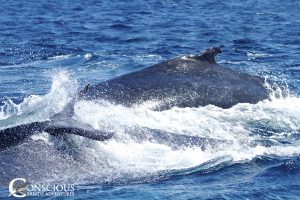 As fun as this all was, sometimes the most amazing things are not seen underwater. One of the more unusual sightings was an observation of a particularly intense interaction between a mother and calf, her escort and a challenger. It started with a typical mother, calf, and escort trio slowly traveling along, but as we watched, another male whale came in to challenge the escort for his coveted position at the side of the female. This is not unusual but what was unusual was the intensity and close proximity of the fighting in relation to mother and calf. The challenger was very aggressive, charging in hard and close requiring an equally strong response from the escort. The problem was that the fighting was happening so close that the mother and calf were virtually caught up in the brawl, like innocent bystanders swept up in a street fight. As we watched from the boat the mother made tight, fast, circling evasive maneuvers at the surface and appeared to be shoving her calf aside as if pushing it out of harm’s way. The force with which she did so was unlike anything we have seen before and 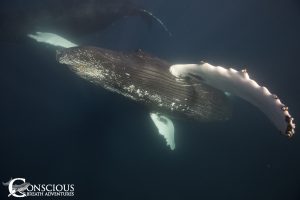 at times the mother even lifted her calf completely out of the water in her efforts. It was as if the risk of injury from her forceful shoves was less of a concern than the potential serious harm from the fighting males. Her concerns were not unwarranted as at one time the challenger charged in and actually separated mother from calf, getting between the two. She immediately surfaced and blew a loud and powerful trumpeting that seemed a mix of stress, anger, and fear. It was an alarming situation to witness. To our relief, this intensity lasted less than ten minutes but seemed much longer, before settling down into a more typical posturing competitive display.

So once again we had another day in another week that shows just how diverse, unpredictable, and exciting the action on the Silver Bank can be. Not knowing what will happen next is what brings us and our guests back over and over, and what I hope will keep you looking forward to next week’s Cruise Report. Thanks for reading and we will be back again next week! 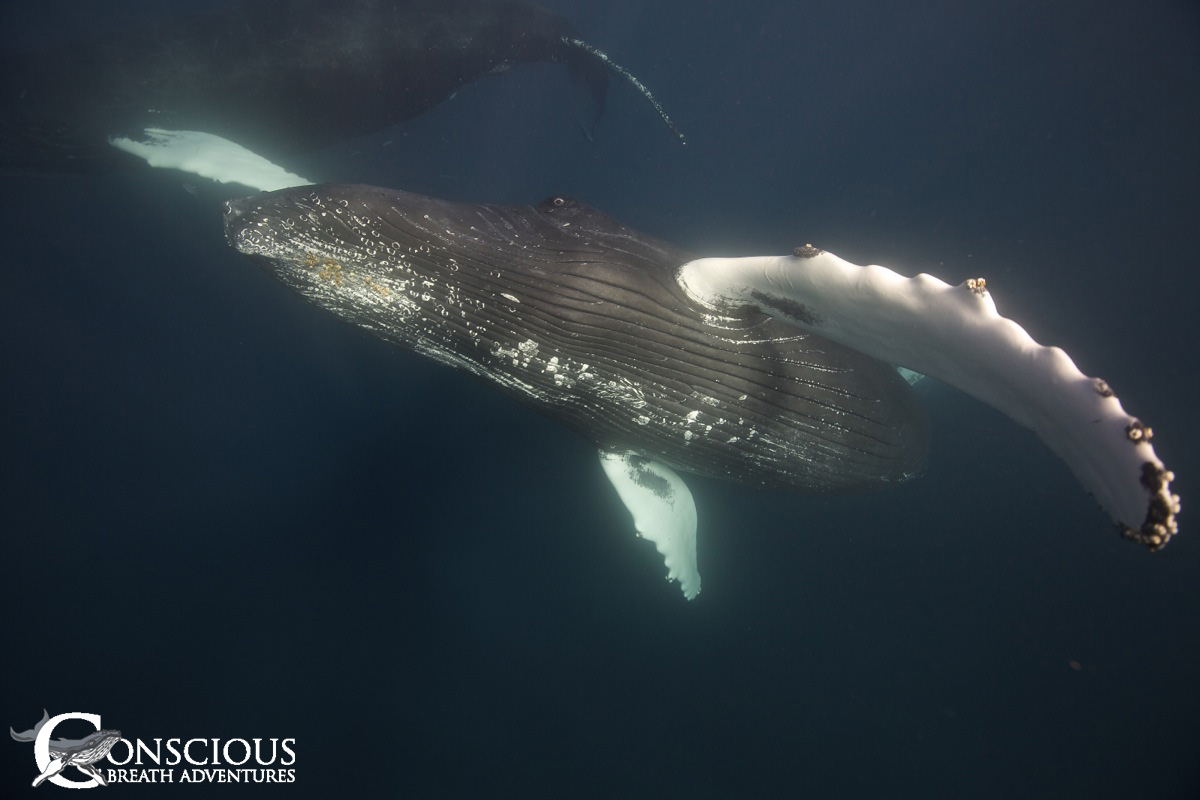