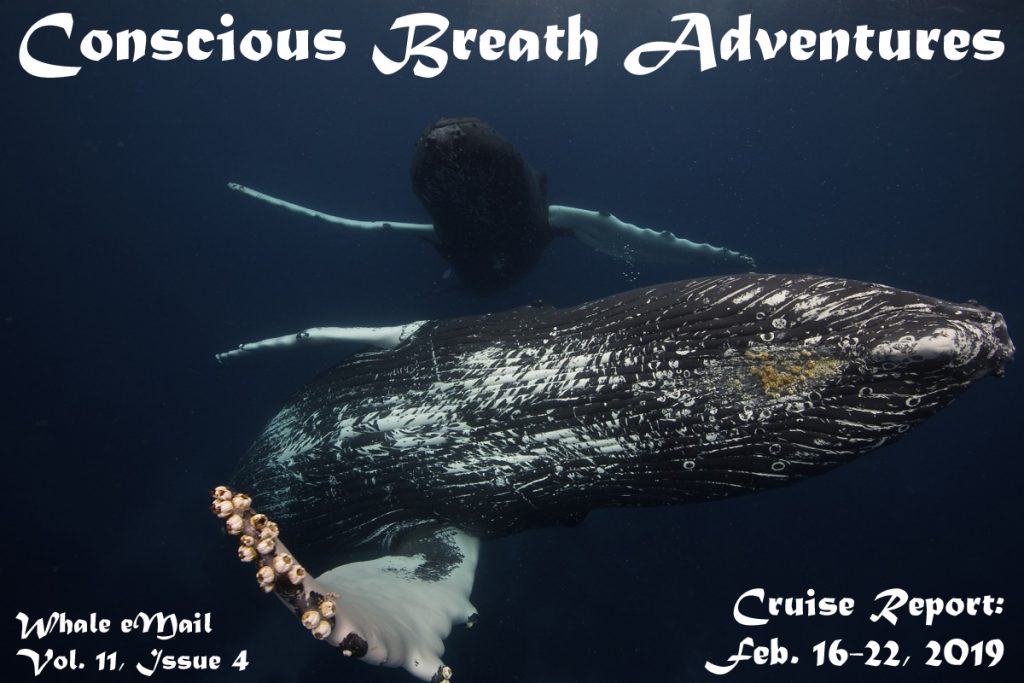 By now our loyal readers know that every week holds some similarities to others, but there is always something that makes it unique from all others, creating an experience that belongs to that group alone. The guests this week took home some prize memories, and here is their story in this latest edition of our Cruise Reports. (As in past issues, be sure to click on the images for a larger view.)

The group this week included some first-time visitors, including one lady who had never even been on a whale-watching trip before. Coming to the Silver Bank on a first whale excursion is quite a way to start a new hobby! The big question is: where in the world will she go from here? We also had a couple of returning whale-friends, including one making her eighth cruise with Conscious Breath Adventures. After this week, it is possible our newest whale watcher might choose to follow that path, too. 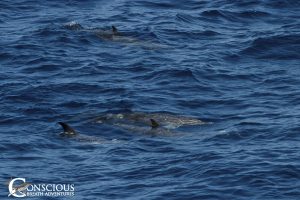 Some surprises are smaller than others but still pack big excitement. Our first came early, shortly after our arrival at our mooring, while two of the crew were still preparing for service our whaleboats, Pec & Fluke, after the tow out from the marina. The crewmen were in the water working when a pod of about a dozen pantropical spotted dolphin came zipping in to see what was going on. The guys had a nice five minute swim with these small, speedy dolphin while the guests all cheered them on from deck.

Later that afternoon another small surprise that brought 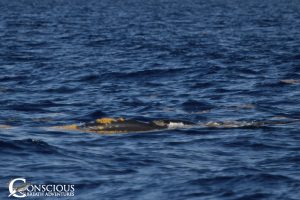 big joy was watching two humpback whales playing in floating seaweed. Humpback whales are quite tactile and will sometimes swim into these rafts of Sargasso weed, pushing it around with their rostrum, hoisting it on their pectoral fins or letting it slide down their back and sides. With their sensitive skin, the whales seem to enjoy it almost as if having a seaweed treatment down at the spa. 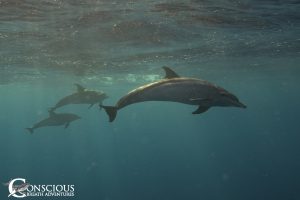 On Monday we had another quick surprise when we happened across three of yesterday’s spotted dolphin. Usually the dolphin are so speedy that they vanish before we are even able to put on our snorkeling equipment but these three gave us a chance and some of our guests were able to have a five minute thrill of their own. During our best interactions we have been lucky enough to swim with the dolphin for over a half hour.

Around lunchtime that day all the boats in the anchorage 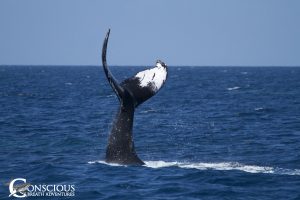 were treated to a mealtime show when a passing humpback slowed to give a ten-minute demonstration of lobtailing, breaching and peduncle throws (aka tail breach). No need to travel far for this display!

The whales are abundant on the Silver Bank this season and so are our opportunities. By the end of Monday one whaleboat of guests reported that they succeeded in swimming with fourteen individual cetaceans from two different species; a fine day by any measure! 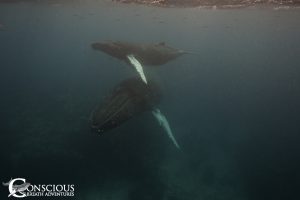 As delightful as this all was, even bigger treats were yet to come. Readers may have noticed a pattern in our experiences with the whale this season, with multiple interactions with two or more recognized whales over a few days’ time. That was again the case for Tuesday and Wednesday when on both mornings our sharp-eyed eighth-visit guest spotted a mother and calf nestled in the reef not far from the mooring, leading to outstanding observations each day.

What made this pair especially enjoyable was their 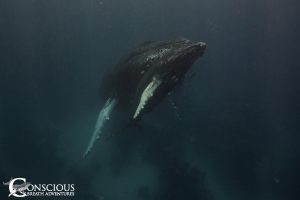 location in the reef combined with a completely relaxed demeanor. On both mornings the mother had chosen to rest in one of the shallowest places on the reef, with numerous coral heads scattered about which create an area protected from the prevailing seas. Because the water is relatively shallow at 35’-45’ (11-14m), the whales cannot dive deep making them easier to observe from the surface. In addition, this duo was very much at ease and completely comfortable with the swimmers in the water with them. The mother would slowly rise to the surface to breathe every fifteen minutes or so, moving slightly as she did so, just to sink back down a hundred feet 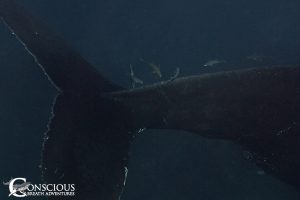 away. For our swimmers this meant we were, like the many fish that attentively linger nearby, able to closely observe the nurturing between mother and calf as we floated there. There were periods of complete rest, times when the calf was a little playful, and for some of our guests there was even the rare opportunity to see the mother nurse her baby. What is most special about this kind of situation is the ability for both whales and swimmers both to be completely relaxed, affording our guests a detailed observation of all the finer details that are easily missed in a shorter or more energetic interaction. Under most circumstances, this mother and calf would have been the highlight of the week (*see a fascinating footnote). 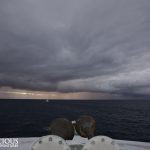 But the absolute best was to come on Thursday, 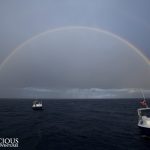 our last full day on the Silver Bank. The day broke with scattered heavy clouds and rain showers but life is how you look at it, and a turn in the opposite direction revealed the beautiful rainbow that can only happen if it rains. Spirits buoyed, we headed out in our boats. 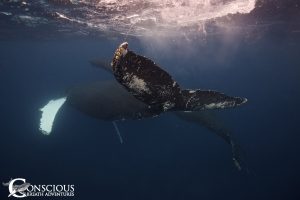 Within a half hour one of our whaleboats located and connected with two whales that would lead to that most rare and exceptional interaction: a swim with a pair of dancers. “Dancing” whales are two adults, usually male/female but sometimes two males, who are engaged in a very stylized and elegant interaction between them. In male/female pairs it is believed to be late-stage courtship and possibly a precursor to mating. And that is the combination we had here.

The female in the pair, quickly identified Friday night through 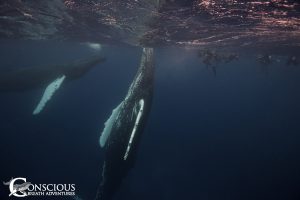 social media (*a fascinating footnote) as a whale named “Mojo”, was highly interactive with the swimmers, curious and enchanted, circling the boat and swimmers closely as her escort watched or participated. Her circling was reminiscent of a feeding whale encircling a school of prey except it there was only playfulness as she swam from one side to the other, 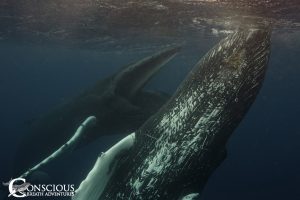 sometimes rolling on her back or spyhopping to have a closer look. The escort was sometimes right there in the action, too, more than once opening his mouth wide to show his baleen and stretch its ventral pleats. This was by far the most rare observation of all, something I have seen just one other time in the 16 seasons I’ve been on the Silver Bank. It was remarkable!

The duo stayed with us all through the morning, 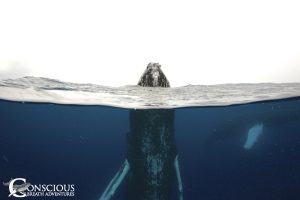 sometimes swimming off, seemingly lost, just to reappear minutes later directly under the boat as if wondering why we weren’t in the water. Words can not do justice to the power of the interaction, and photos are only slightly better, but anyone who experiences this can only wonder: what are they thinking?! What draws two whales, wild and free, 75 nautical miles from land, to interact so closely with a bunch of awkward, wiggly terrestrial human swimmers? What is going through those beautiful animals’ big brains? In a way, personally, I hope we never know…

After everything that had we had experienced, there was nothing more to do but head on home and try to absorb the impact of this exceptional wildlife encounter that our guests this week will forever call their own.

With that, here is looking to next week, when it is impossible to predict what may happen next.

Until then, thanks for reading!

I posted a series of fluke ID photos 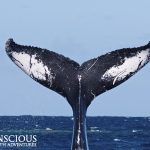 on Facebook on Friday before starting to draft this Cruise Report. By Saturday noon the mother whale had been identified as a female known in the North Atlantic Humpback Whale Catalog as “NAHWC6646”. She has previously been spotted off Virginia Beach in Dec. 2012 and again in Nov. 2017. And now on the Silver Bank.

The second big star, the female dancer on Thursday, was also quickly identified 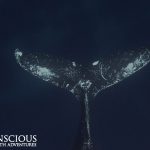 as a whale known as “Mojo”, interestingly also a regular of the Virginia Beach area. But what was amazing about this ID was that it was made by a whale watch operator from that area who happens to be one of our new guests, while in transit to meet the boat at the start of Week 5! 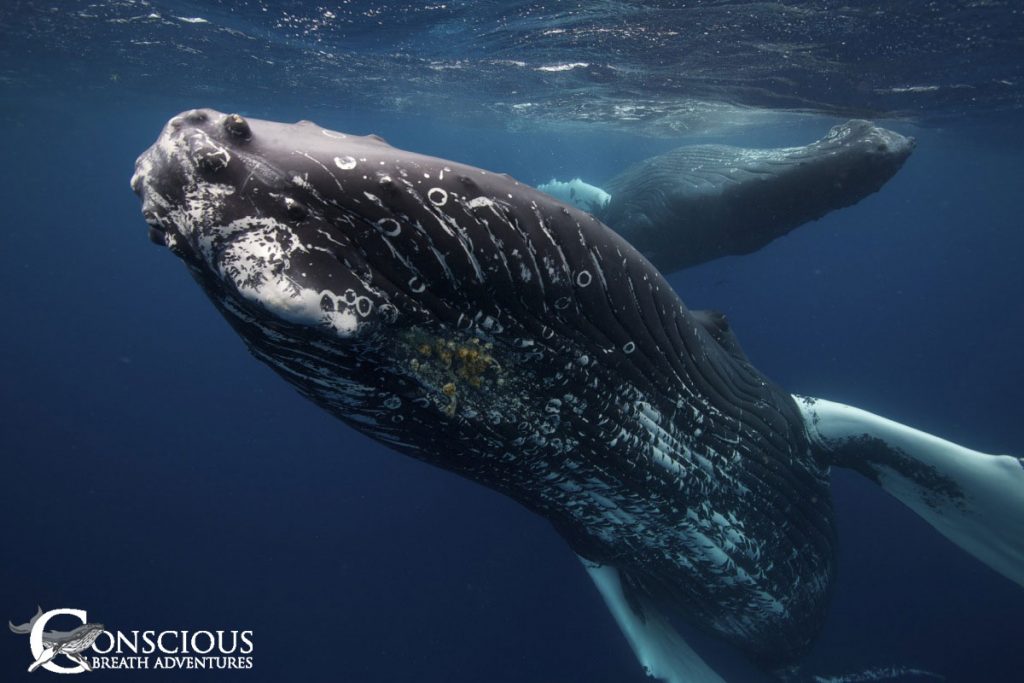