Welcome to our Cruise Report for the week of February 2-8, our second cruise of our 2019 Silver Bank humpback whale season. Carrying on with our early-season success of last week, this was another eventful cruise that others will measured against in the future.

The group of guests aboard this week was a boatload of whale professionals and whale lovers headed by friend Jeff Friedman, owner of Maya’s Legacy Whale Watching, located in Friday Harbor on San Juan Island in the Pacific northwest, where they seek and see the endangered southern resident and transient pods of orca, plus an increasing number of humpbacks. The group included Jeff and his wife, back for their fourth visit, along with partners, employees, staff from fellow whale watch operators, and some of their most diehard regular whale watching customers (click all images for larger view). While our cruises always draw a dedicated group of whale lovers, this bunch took that to an even higher, almost fanatical, level.

The week provided us many of the classic experiences of a great Silver Bank cruise. The weather was again very mild and pleasant and the whales were still present in abundance, with multiple blows visible at almost any time. Highlights included an epic 45 minute up-close and personal surface display that we shared with a fellow operator, watching as two whales lobtailed, pec slapped and breached repeatedly, coming up right next to the boats to show off as we drifted along. As incredible as that was, the topside event of the week was much briefer and more unusual when every whale watcher on the Silver Bank was 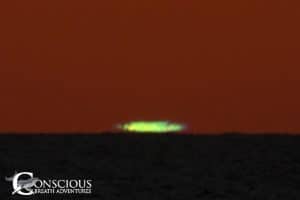 treated to a double – double breach! This was two pairs of two whales maybe a couple hundred yards apart and about half a mile from the mooring that started breaching individually and in pairs, one pair or both, doing half a dozen breaches or more per pair. It was an awesome show unlike any we have seen before that left us all screaming and laughing. Add to that, we even saw another couple green flashes as sunset, too! 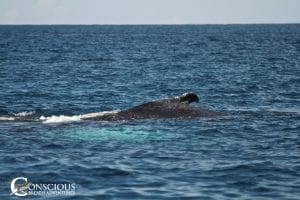 But as great as all that was, there was still a standout event which just happened to last all week long. It started right away on the first excursion Sunday afternoon when we found a mother, calf, and escort resting in the reef a short distance from the mothership. This mother whale looked familiar, with a distinctly heavy, deeply curved dorsal fin that has earned from us the nickname “Hook”. Our first introductory swims with the trio were a nice way to start the week but it only got more interesting from there.

To make a long story short, in any given week our 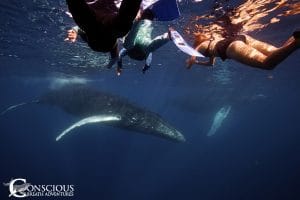 guests have nine opportunities to go out on our whaleboats to see and try to swim with the whales. Our enthusiastic group of whaleswimmers was ready for every chance they could get. And so were Hook, her calf and escort because we saw and swam with the trio on every single one of those nine excursions this week! That has never come close to happening before.

Every morning or afternoon, we found the trio right away, usually in less than fifteen minutes. There were lots of whales on the Silver Bank, easy to see in any direction, but we always seemed to bump into these three every time we set out, no matter which way we went. They were never more than one mile up or down the reef from the mothership and always resting, drifting or slowly swimming along. We even saw them from the deck of the mothership during meals and twice they were alongside for our sundowner celebration at the end of the day.

Now, it is not unusual to see a mother and calf 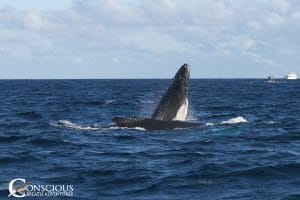 a few times over a few scattered days or weeks during a season. But it was highly unusual to see a mother and calf nine excursions in a row, made even more so by the unfailing presence of her quirky escort. We have seen females with escorts for a couple days in a row, but never have we seen the same trio for five full days, never mind swimming then with them! 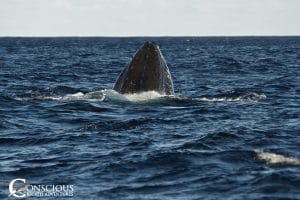 Hook is a large female who cuts quite a presence with her large, heavy dorsal but the escort was notable for his behavior. He had a particular habit of rearing his head up, doing chin lunges and generally throwing his head around at random intervals. It was the kind of behavior one would expect if there were another male challenging him but there never was. In the whole week we only saw one halfhearted challenge that lasted just minutes. The other occasions he did this we had no idea of his motivation, he just did it. It seemed his place at Hook’s side was certainly secure.

Being able to spend most of a week with three 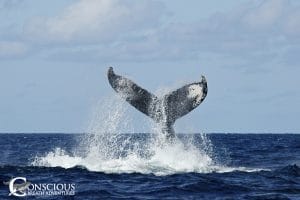 whales really gives watchers a change to observe all their behaviors. In addition to the escort’s moves we saw the calf go on breaching bouts, presumably after feeding and energizing, breaching over and over again, and he loved to approach the boats while doing it. Mother and escort stole the show one time, with both of them lobtailing, pec slapping and breaching repeatedly as we all looked on and cheered. And of course there was plenty of quality time in the water with them, too. 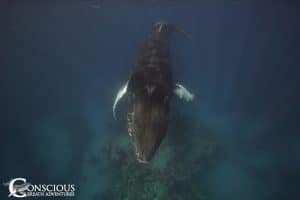 Wednesday was the finest in-water day, with light breezes and sunny skies. The trio barely moved all day as they drifted or slowly moved along inside the reef, never more than a half mile from the mooring, first moving slowly away from the mooring before turning back toward. Hook and calf were a calm, peaceful pair but the escort would on occasion pass close by or below, stealing the show, letting us know he had his eyes on us.

Whenever we welcome a new group aboard there is always 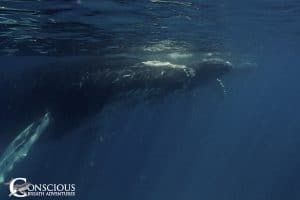 an understandable excitement and hungry need to see and swim with the whales. But when we are able to spend this much time over five days that sharp need mellows to a full-time whale contentment. Whether in the boat or in the water, everyone was happy to just be with the whales, with open and clear minds, with no strong needs, and it was at times like this we had our best swims, companionably drifting along together hardly flicking a fin, with almost no effort required. 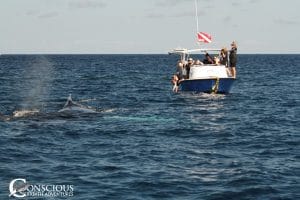 And so it was, morning and afternoon, day after day. We would leave them to wander off to look around, watch a surface show, or head back for a meal and the trio was never far away. They were even with us at sunset of our last full day on Thursday. What a way to end an incredible week and we will be looking to see them next week. I hope we see them but have a feeling that, without the boats there, for whatever reason, they will have moved on to a different area. I hope I’m wrong!

Having recognized Hook, curious, upon coming ashore we reached out to some of many friends in the North Atlantic humpback whale community, Jodi Frediani, Joanne Jarzobski and Roger Etcheberry, who helped fill in some gaps on Hook’s history. The whale we call Hook is a known whale that spends her summers feeding in Newfoundland, cataloged there as SPM1097. She was first photographed in 1993 during the multinational Year of the North Atlantic Humpback (YONAH) study and was also photographed on the Silver Bank in 1998 by the US National Marine Fisheries Service. Guests of Conscious Breath Adventures then swam with her twice in January and February of 2016 and she was again sighted in June of that year off the coast of St. Pierre, Newfoundland. And now here again, with calf, for this week on the Silver Bank, 2019!

Tune in next week for any new updates,