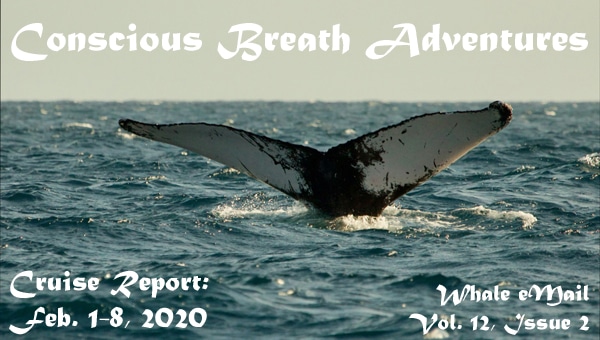 This being week two, it is appropriate that “two” and “twice” were the themes of the week.

This week featured a boatload of happy visitors from the US, Canada, the UK, the Czech Republic, France, Columbia and Switzerland. Fortunately smiles and laughter are a common language for everyone so there were no barriers to a good time.

But before you can have a second of anything, you have to have the first of it. And so our adventure started on Sunday afternoon when we found a pair of resting whales that gave us a nice swim. Much like the pair last week, these two were very curious about the swimmers, often turning directly toward us as we floated on the surface. The whales were calm in their approach but very interested, with their eyes wide open and looking at us as they passed. They did this for us several times giving our guests their first eye to eye encounter with wild humpback whales.

After a brief search on Monday morning, by happy coincidence we found the pair again and they were every bit as engaging as before.

We are always happy with two whales but can be very happy with one, especially if the one is a singing male. In the afternoon good fortune favored us with a young singer testing his voice on the big stage of the Silver Bank. He was not shy and was singing his heart out, giving all our guests the chance to take turns experiencing the performance from the front row. Between all of us we listened to the bone-shaking song for nearly an hour. 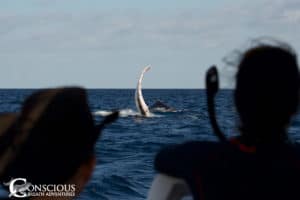 Things are livening up out here on the Silver Bank

It is a humpback singles party, and our guests saw a lot of exciting surface activity, too. On some days there were 3-4 sets of breaching whales scattered near and far, or couples engaging in pec slapping or vigorous single and double lobtailing. Sometimes the activity was close enough that you could smell the whales while

they smacked away (breaching whales are stinky!). I was able to capture a few good photos but it always seemed like the really spectacular close-up stuff was happening next to our other skiff. Fortunately we switch boats daily so everyone had a good look!

On Tuesday nights I give an educational presentation on the biology and natural history of humpback whales. The presentation includes information about fluke identification through photography, and ends with me telling the story of my personal connection and experiences with a whale I call Mystery (but known officially as NA2491). It is foretelling that even before the rest of our history developed, Mystery was already featured on my business card. 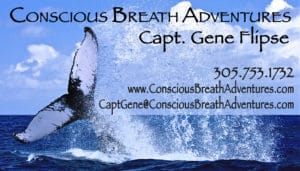 It is an interesting story that I will save for after the season.

Several years ago I gave the presentation on Tuesday as usual, only to find and swim swim with her the very next day. This being the week of twice, the same thing happened for the second time. One of our skiffs crossed paths with a pair of whales that were resting and on one of their breath cycles one fluked up and there she was, recognizable in a second. To their great credit some of the guests recognized her before our group came over for a swim (see the header image). This is around the seventh time or so we’ve met and it is always very special to see her again.

Earlier on Wednesday we’d had a fleeting interaction with another duo, and the female had an intriguing behavior. Every few minutes she would do a giant underwater back flip, back arched as she inverted herself to look at us with both eyes as we floated on the surface. It was a bit unusual but very exciting. This only lasted a couple breaths before he pair moved on.

By now you can probably guess where this is going… 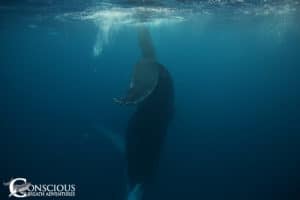 On Thursday morning the skipper of the second skiff called us on the radio to tell us that Jeff and his group were in the water with a dancer, a humpback engaging in highly interactive social behaviors with the boat and swimmers. We quickly made our way over to the dance floor, too. When our group had their turn in the water I immediately recognized her as the same intriguing whale from yesterday, except now her curious behavior had evolved into a full-blown dance. 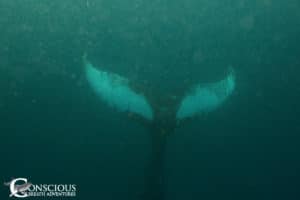 She seemed to fancy head stands and twists, and sticking her tail up out of the water. Her fluke featured some very distinct rake marks from an attack by orca at some time in her past. Hopefully we will be able to make a match in the near future.

It was a week of two time whales and others, too. We enjoyed beautiful sunsets, delicious meals, great moon and star-gazing and all-around good times. The M/V Sea Hunter and her crew continue to shine, exceeding our expectations on a regular basis. And given what I expect, that is saying a lot.

Thanks for joining us again, stay tuned for next week’s Cruise Report at the end of week three. Time for a triple breach, maybe..? Only time will tell…