Progress on the Entanglement Risk to North Atlantic Right Whales

The Atlantic Large Whale Take Reduction Team, a group set up in 1996 as part of the U.S. National Oceanographic & Atmospheric Administration’s (NOAA) National Marine Fisheries Service to try to reduce the risks to large whales in the Atlantic, wrapped up a four-day team meeting last Friday, April 26. Their discussion focused on one of 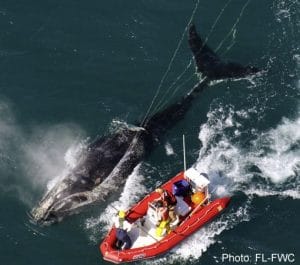 the deadliest risks to whales – entanglement in fishing gear. More than 300,000 cetaceans are killed by entanglement worldwide each year. In the Gulf of Maine region, where so many whales spend the summer feeding and which is also the epicenter of the American lobster fishery, entanglement is a top threat. North Atlantic right whales (Eubalaena glacialis) are of particular concern because their numbers are so low with only an estimated 411 individuals remaining. Around 85% of all right whales show evidence of having been entangled at least once. Keeping the oceans safe for whales but able to support an industry and food supply for people is a challenge.

The group concluded with a recommendation to reduce the number of vertical fishing trap lines in New England fishing grounds by up to half (with different amounts for some of the regions). The group also proposed the use of lighter ropes that would make it easier for entangled whales to break free. These suggestions are still open for comment until a final rule is made. And, while conservationists were encouraged by the rare display of consensus, it could be quite some time before anything is implemented into practice.

Also conspicuous in its absence – as noted by whale advocates – was a discussion on ropeless gear. Littering the seas with ropes and chains, ghost gear and plastic discards can’t be considered sustainable in the long term. Switching to traps that work without miles of floating lines would be a significant improvement. So, how does this work and what other technological advancements are in the works? Three developments in trap fisheries that are especially relevant for whales are ropeless gear; weak links; and computer modeling. Also check out this 4 part series from The Future of Fish for more interesting and positive news on tech-savvy ocean systems. 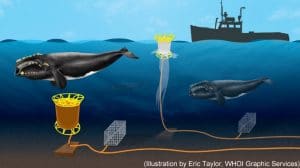 Ropeless gear is not really ropeless – the rope is on a spool secured on the sea floor so that when the lobster boat returns to haul in their trap, a unique signal from the gear’s owner unlocks it so the ropes can rise and be hauled. An informative report from Woods Hole Oceanographic Institute is here. It’s probably the most promising technology currently in development but without focused research and field-testing, it’s a long way off. Learn more about the efforts underway by the Ropeless Consortium at Ropeless.org.

Modifying the rope to break easily, allowing the whale to escape, is an option called whale release rope. Whale release rope features a netted sleeve that connects two sections of rope so it effectively holds them together but acts as a weaker link that the whales may be able to break.

One concern raised by fisherman is that they don’t want weak lines. In response a Maine lobsterman has proposed a solution that is essentially a self-severing rope. A sleeve or tube holds an hydraulic piston with a razor blade attached. When the rope is hauled in it starts a mechanical timer on the piston. Only if the tension continues for longer than a set period – say 30 minutes – does the blade activate and cut the rope. This concept also needs deployment and testing.

Understanding how whales become entangled in the first place could help in the design of safer fishing apparatus. The problem is that no one ever sees that fateful moment. And, how do we know for sure that lighter strength rope will help if we can’t actually test it on a real whale? One solution is a computer program that has been developed called the “Virtual Whale Entanglement Simulator”. Using this simulator, scientists can test different strengths and configurations of ropes with different sized whales and varying behaviors.

For now we will watch the news and be sure to provide input when NOAA opens the comment period for the line reduction rules. Also worth doing, as suggested by both the Natural Resources Defense Council, Earth Justice and others, is writing to your House Representative in Congress (find your Representatives here) regarding a bipartisan piece of legislation – The Scientific Assistance for Very Endangered (SAVE) Right Whales Act (H.R. 1568) – which would allow research and refinement of these solutions.

Finally, supporting organizations such as Provincetown’s Center for Coastal Studies who work to not only educate but also disentangle whales is critical. Check out their 1000 Friends of Right Whales program.

As always, the first steps to reducing entanglement are staying informed, sharing updates and letting others know that our choices as consumers matter. A world where we can enjoy seafood without whales paying the ultimate price is possible and, hopefully, with continued effort, closer than ever before.