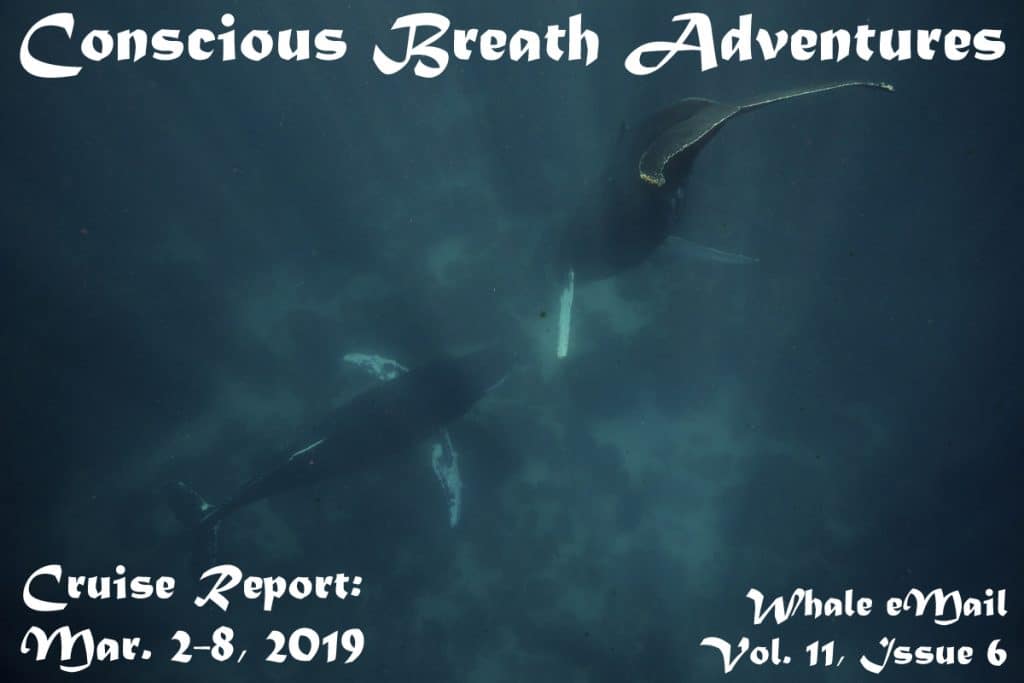 Hello and greetings from the dock at Ocean World Marina, Cofresi Beach, Puerto Plata at the end of our sixth week of our 2019 Silver Bank humpback whale season.

Our group this week was an interesting and vibrant group of folks, a whole boatload of friends gathered to celebrate a milestone birthday for one of the group, a coming together of folks from many countries including the U.S., Turks & Caicos; the U.K., Poland, France and Belgium (and probably a few more). They had many interesting stories to tell from all over the world but by the end of the cruise they all had a very new story to tell about the Silver Bank (click photos for larger view). 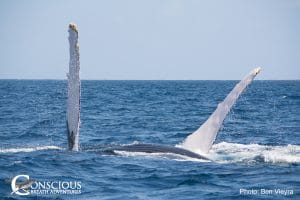 It has been a very solid season, with plenty of action on every week, both in and under the water, and happily this week was more of the same. We have enjoyed all the spectacular surface behaviors, sometimes up close, and had excellent in-water interactions, too, but there were a few standout events that highlighted the week. In fact, we have too much to share in this one report  now but you can see more of them in our short Week 6 video report.

One of the early highlights was when one of our whaleboat Pec was out for the afternoon looking for whales as they slowly motored along, when the skipper heard over the motor the distinct chirping squeaks of the humpback song. Quickly shutting down the engines, everyone aboard was able to clearly hear the song right through the hull of our boat. With some skilled maneuvering skipper John was able to put the boat in close proximity so that the guests were all able to get right in and literally immerse themselves in the music. Our other boat Fluke was able to join the scene a short while later, allowing all our guests the chance to share in the unforgettable experience. Conditions were ideal and this male was really booming so the power behind his singing was amazing. For swimmers it is typical for the song to vibrate the long bones in their arms or legs, or tickle their chest cavity or elsewhere as the song literally flows through their bodies. But what was remarkable about this situation was that the song was so strong that it did more than that, it even shook the boat itself, and the vibrations could be felt through the guests’ feet on deck. That was a new level of song power to us! To top it all off, I was able to capture an 18 minute recording using our Aquarian Audio hydrophone hooked up to a portable digital recorder. It is my best recording of the season to date and you can hear it by clicking here. For the best listening experience I suggest you play it through your home stereo and crank it up until the china rattles in the cabinet. Hopefully some day you will join us in the water with a singing humpback yourself but in the meantime this is the next best thing. 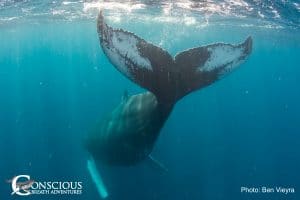 As wonderful as this was, the big story of the week was even more significant when on Wednesday morning we found again the very pregnant female which we sighted last week on Feb. 26 and an escort. At that time we were left wondering how soon her calf would come but the answer was: not quite yet! During this morning our guests were all able to share the same experience as last week’s, where the female would rest motionless, diagonal in the water column, head down with her fluke just a few feet below the surface. 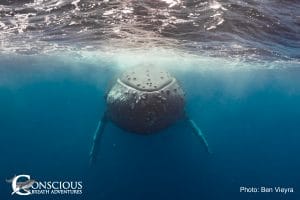 About every 10 minutes she would imperceptibly rise to the surface to breathe, logging there for 5-6 minutes at a time. All of this was good enough but once on the surface she invariably pivoted slowly toward the floating swimmers to keep us right on her rostrum. No matter which way she was facing while resting below, she rose, pivoted and floated just in front of us as she refreshed her O2 before slowly sinking back down again, all without seeming to move a muscle except for the slow swing of her pectoral fins.

Her escort was at ease, resting, sometimes circling below and on a few occasions sneaking up closely behind all the swimmers while they were admiring the female floating just yards in front of them.

Things got even more exciting later in the day. By this time she rarely submerged at all and then began to have episodes of unusual activity. With no discernible outside influence, she would repeatedly trumpet loudly and forcefully at the surface, sometimes swishing her tail and pectoral fins, writhing there as if in some discomfort. Then after a few minutes of this she would return to her typical pattern of behavior logging virtually motionless on the calm surface for another half hour. Even later in the day, in the last hour and a half of daylight, she even started laying on her side as she had these episodes and for the swimmers it did look as if there was some movement, a sort of looseness, in the area of the genital slit where a calf would come.

It is hard to know for sure but to us observing, it was easy to interpret these episodes as the possible onset of contractions, maybe? It seemed a distinct possibility. We were all filled with excited anticipation that perhaps we might be the lucky folks who got to witness the birth of a humpback whale in the wild. Each of the half-dozen episodes left us more and more tense and its quite possible that the whale was actually breathing more than we were!

But time, tide and sun waits for no man and finally, with the sun falling and being nearly two rock-strewn miles from the mothership, we had to leave her resting peacefully with her escort, filled with the question: will we see her again tomorrow? Or ever? And if so, will she still be pregnant?

Come Thursday morning we returned to the area to have a look. 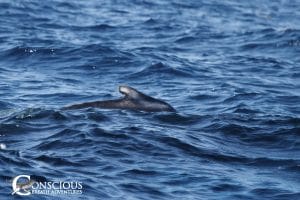 We had saved her last position with our GPS so we were able to go right back to the very rock where we had left her but, to no great surprise, she was not there. We spent nearly two hours trolling the area, checking every set of blows we saw. We actually did find a mother with a very young calf, perhaps 7-10 days old, one of the youngest we’ve seen all season, but it was definitely not the mother on our mind. With whales all around we gradually gave up the focused search and went back to our usual routine.

But we were not done with this story yet! In the mid afternoon one of our boats did indeed find her again, a mile closer to the mothership, with her same escort, and still pregnant! We settled into the same 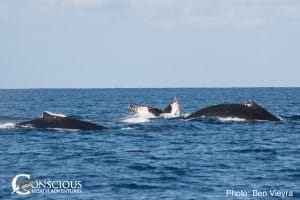 topside observations when her rest was soon interrupted by the arrival of two very challenging males. What quickly ensued was a full-on rowdy group competition as the primary escort vigorously fought against the bold newcomers. Typically it is the female that sets the pace of the action and in this case her maternal condition was no apparent deterrent as for nearly a half hour the four whales charged hard about the Silver Bank. Fortunately the seas were calm and following at a distance was not hard but it was a bit distressing to think of her exerting herself so strenuously while in her presumably advanced condition. But humpbacks seem to be made of some strong stuff! After about a half hour of this the action abruptly stopped and when the bubbles cleared we could see that her primary escort had been displaced and a new escort was now at her side.

And so we spent the last hour of our last day of the week watching and swimming with her just a quarter mile from the mothership where her earlier chase has stopped. And as before she rested motionless on the surface, with no apparent signs of discomfort, until we once again had to leave her with the same questions as yesterday, and last week: when will we see her again, and when will her calf come? One thing we know for sure is that on Thursday afternoon she was nine days closer to giving birth than she was Feb 26! It just seems it can’t be too much longer…

We will be watching for her next week…