Greetings to all our readers and welcome back to another issue of Conscious Breath Adventures’ Cruise Reports, this one for our fifth week on the Silver Bank, February 23-March 1, 2019. Thanks for joining us and remember to click images for a larger view.

Once again we had a diverse group of delightful guests from around the globe. We welcomed back some returning visitors from France (2nd visit), as well as new and returning visitors from Germany (3rd visit) and the U.S., too (19th visit!). Once again, our cruise to the Silver Bank was like a meeting of the United Nations of Cetaceans, with everyone united with the common goal of experiencing the humpback whales eye to eye in their natural environment. In this, the group was not to be disappointed. 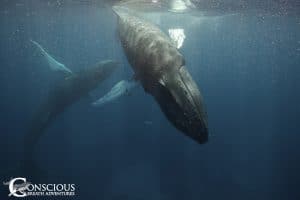 The players in this game got off to a fast start, jumping into the big-league on their very first day on the water, when our boats located two adult whales socializing on the surface. After initially interacting with one boat they briefly disappeared only to show up right next to the other about a half mile away. Then for the next hour and more the whales never wandered very far as their behavior evolved into one of our all-time favorites: a pair of dancing whales.

The romanticized interpretation of a pair of dancers

is that it is a male/female pair in the late stages of courtship, possibly a preamble to mating. And that may very well be in many cases but, in this situation, the star of the show was definitely a male and his companion appeared to be so, too. Sometimes dancers are a pair of male whales just being a very friendly buddy team. 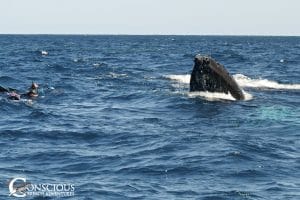 But as with all great interactions with dancing humpback whales, the action was inspiring, enthralling, and on a massive scale. The 40’ (12m) pair swooped, spun, bobbed and twisted, passing under and in front of the swimmers, circling below to surprise from behind, just to come straight in again from the front. The primary dancer was looking at all the swimmers closely, with his big eye rolling back and forth as he checked us out (see header image). He also was making repeated high-pitched squeaking and chirping noises that were plainly audible to our swimmers. Our best efforts to imitate them were only a fair interpretation but did seem to elicit a response as the whale would stop motionless in the water to study the swimmer doing the squeaking.

A good swim with dancers is a peak experience on any week and we were happy for our thrilled guests but when it happens early in the week the question that inevitably follows is what comes next? On the Silver Bank you just never know.

On the following day, wondering how we would top that, we set off to meet more whales. It may be hard to top dancers but we were fortunate to have plenty of opportunity. The whales are on the Bank in abundance and it was at times possible to see 6-8 sets of whales scattered within eyesight, without having to look long or hard. It was a big bowl of Silver Bank “whale soup”!

As we worked our way southeast along the reef that morning, our boat spotted a pair of whales in the protected area behind the rock. It was a bit breezy which made keeping an eye on them a bit of a challenge but an unusual giveaway was the repeated “footprint” created on the sea surface resulting from the turbulence of a kicking whale. Like the calmer wake of a passing ship in choppy seas, the footprint is a clear indicator that a whale has passed through. But this footprint kept reappearing in the same location, indicating a stationary whale, vertical in the water column, with fluke stirring the water from just below. After observing for a while to discern the pattern of behavior, we got in the water.

It was another delightful encounter! The whale 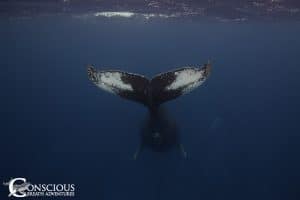 vertical in the water was a female, obviously hugely pregnant as her girth was just amazing. She as so large it looked like she might give birth any day! She was just resting there hardly moving and not minding our presence one bit. Her escort, meanwhile, was the star of the show as he slowly circled and swam below us, occasionally blasting off to confront a challenging male that was lurking in the area. The escort would wander out of site only to sneak up on the swimmers from just below or behind. 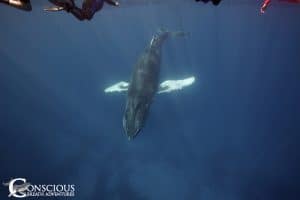 His constant activity made him even more exciting than the big momma floating just in front of us. And while it may not have had the pure excitement of a pair of dancers, it was a phenomenal combination of elements that made for one of the most memorable interactions so far.

Beyond these highlights, our guests saw and swam with a number of the many mother and calf pairs that are in residence here this year. 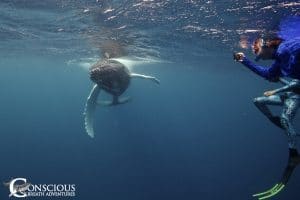 One calf in particular was especially friendly and frisky, rolling and corkscrewing her way through the water as she checked us out. On two other occasions we were able to find and swim with a singing male whale, allowing me to make one of the best audio recordings of the season. Unfortunately, limitations in Dominican internet prevent me from sharing that with you now. Watch for it after the season! Toss in a couple dolphin sightings and a green flash or two and it was the making of another typically, delightfully unique adventure with the humpback whales on the Silver Bank.

See you next week! 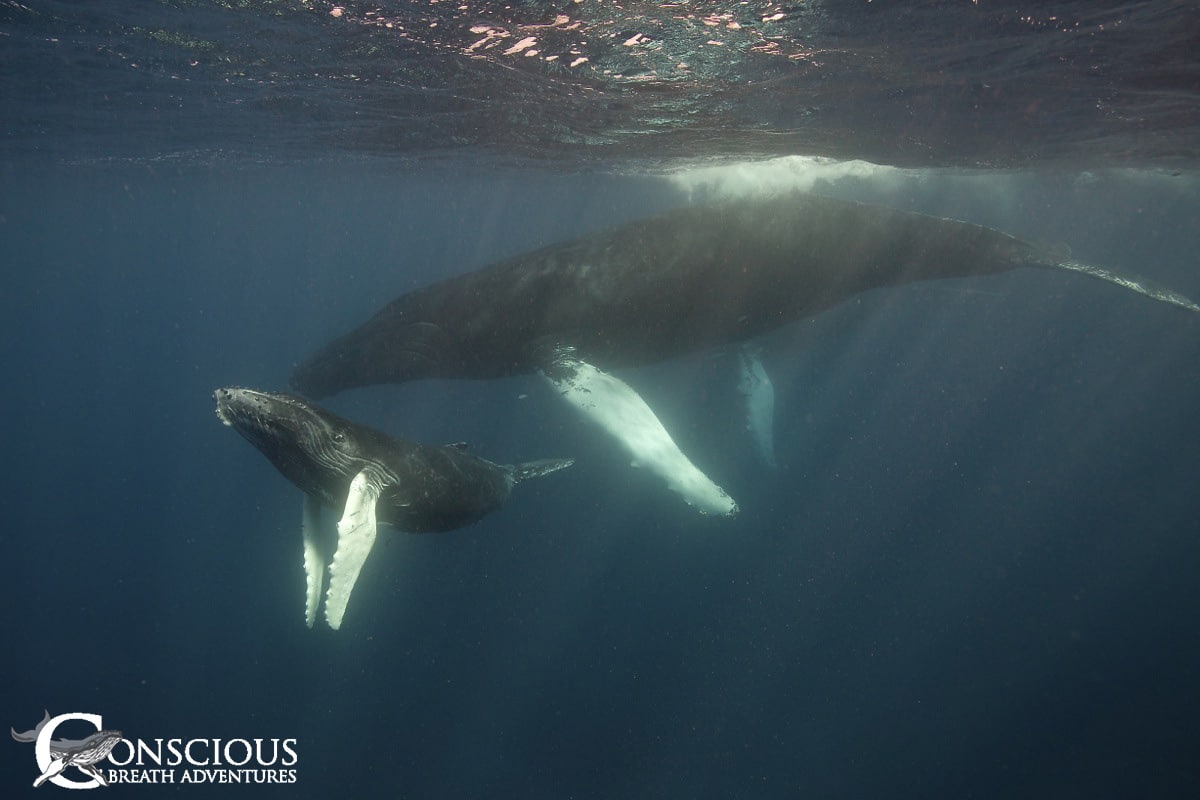