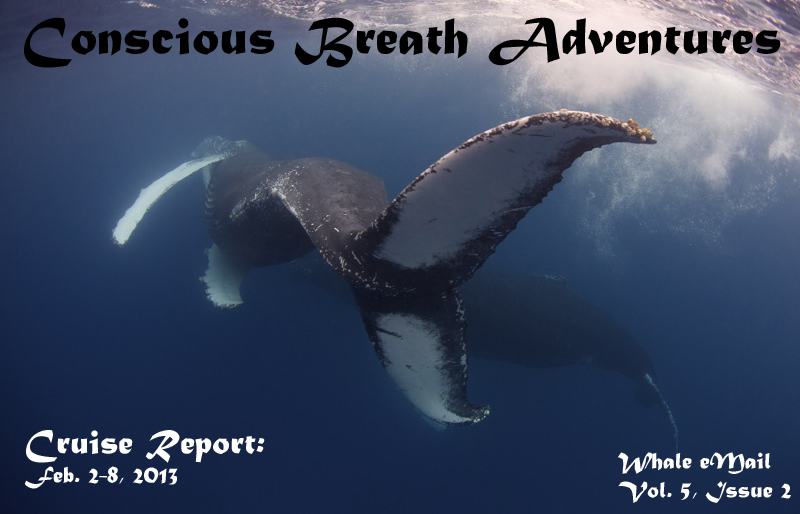 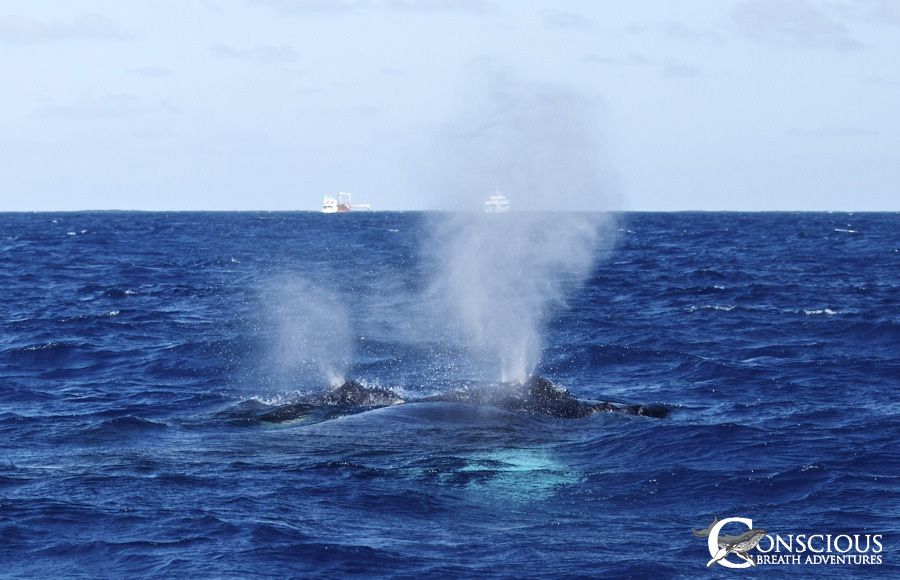 Sunday, January 27
This morning we arrived on the Silver Bank for our first day of the 2013 Silver Bank humpback whale season, and I am happy to report that there are whales here! For the early risers in the group, there was a chance to see some pec-slapping and even a few breaches as we cruised across the bank to our mooring site.
After the crew installed the mooring we will use for the rest of the season, our guests received their first introduction into how we do what we do with the whales, learning the proper techniques and protocols we will use to encourage the whales to interact with us.
After lunch we set out on our first excursion and before long we found a mother and young calf (above) who were being pursued and hounded by what was presumably a single, randy male whale, cruising at over 5 knots. I was able to capture my first fluke photo of the season, the escort shown in the header at the top, which has some very distinctive markings. It seems like it should be an easy match for one of you Flukematchers out there. Who knows this whale?!
After tracking for a short while we broke off and headed into the reef and just moments later found a single whale resting among the rocks. As soon as we came to a stop we quickly realized we had found a singer! Within a few minutes everyone was in the water swimming with whales for their first whale encounter, the first of the season, and with a singer no less (below)! The song is around fourteen minutes long and much different from last year,  and hopefully I will be able to capture a full recording soon. After a good half hour with this whale it was back to the M/V Sun Dancer II to wrap up day one. 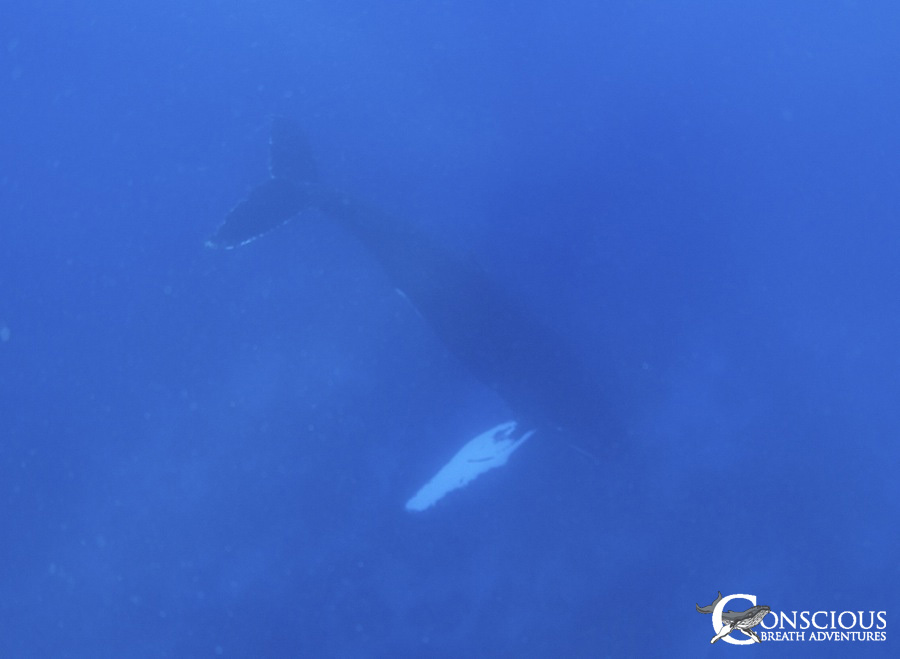 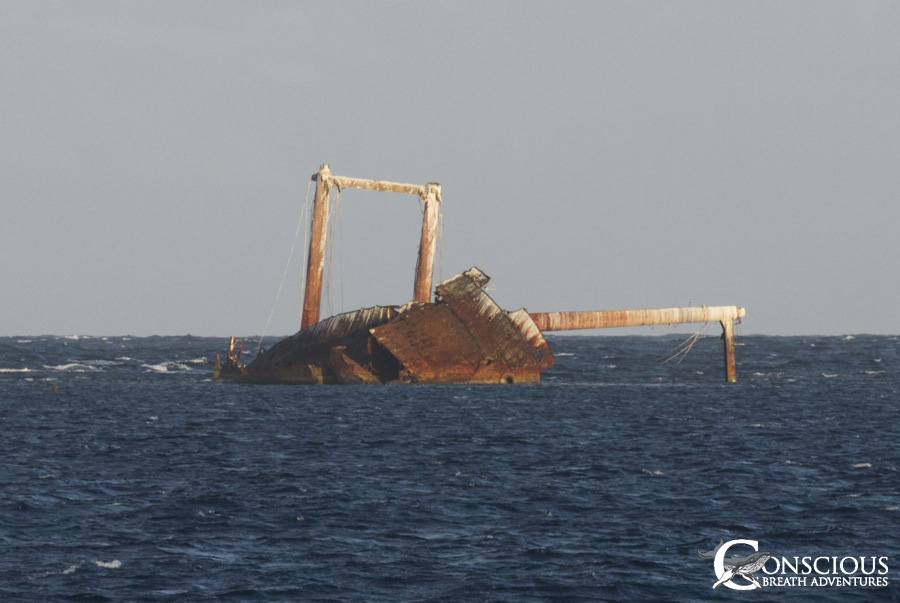 Monday, January 28
Today was a bit of a challenging day. It was windy, and overcast at times, and while there were lots of whales in the area, none seemed very settled and we spent our time doing a lot of whale watching from our two whale boats, Pec & Fluke. We saw plenty of topside activity, but with the wind it always seemed the camera was in the bag when the action started.
We did spend some time putting our Aquarian Audio hydrophones to good use, listening to the chorus of whales that are singing night and day on the Bank.The song this year has some interesting elements, watch for a recording to be posted in the future when Dominican internet allows.
For curious “wreck-watchers” out there, it is a surprise to say that the wreck of the Polyxeni still stands (above). Its two remaining upright cargo masts have settled even deeper into the water but, amazingly, have not fallen over yet. How much longer can they last?
_____________________________________________________________________________________ 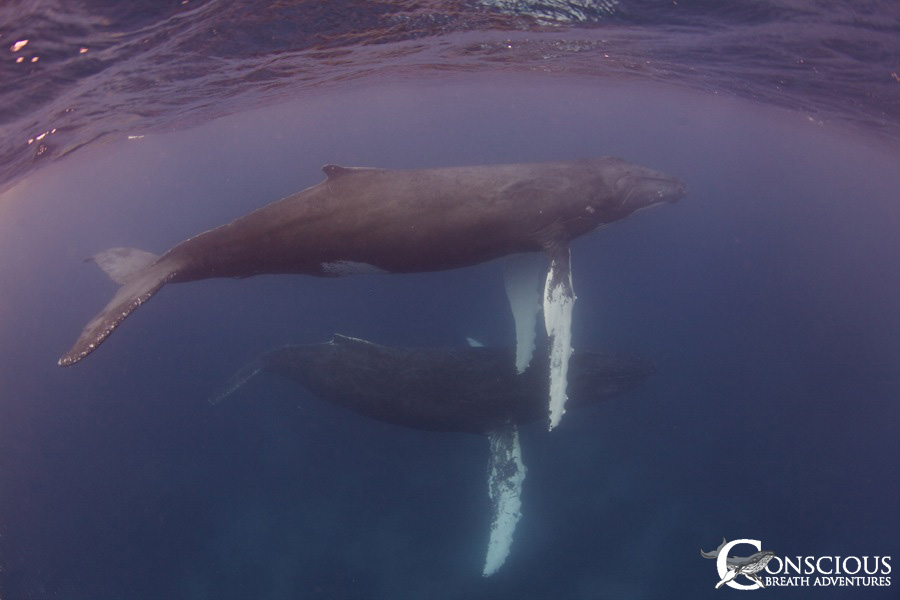 Tuesday, January 29
Today started out a bit breezy too, but our efforts were well rewarded when we found a pair of adult humpbacks, a male and a female, in among coral heads in the reef. We entered the water to watch quietly from above but the real excitement happened every time the female came up for a breath.  She would slowly rise and turn and, with her escort following just below, circle the swimmers repeatedly at close range, three or four times. She was very curious about us all and gave everyone a very good look in the eye. Then she would settle back down only to repeat the action on her next breath. It was quite a show that everyone got to enjoy! 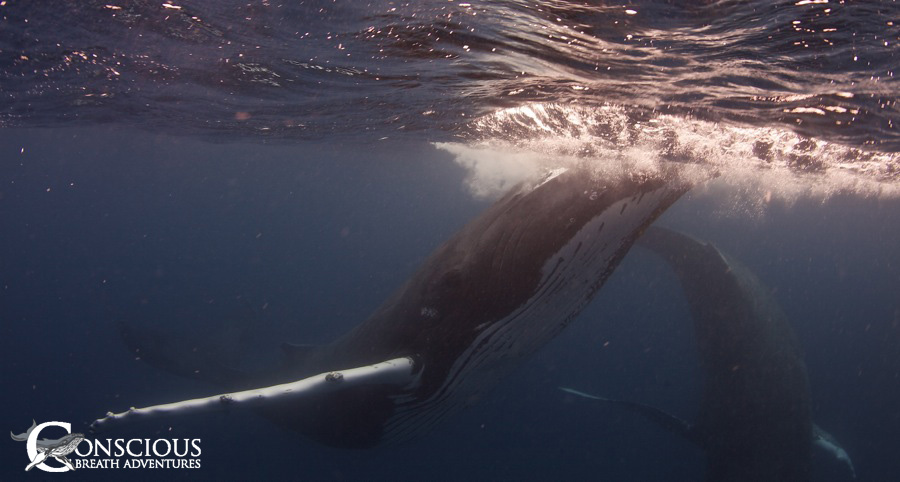 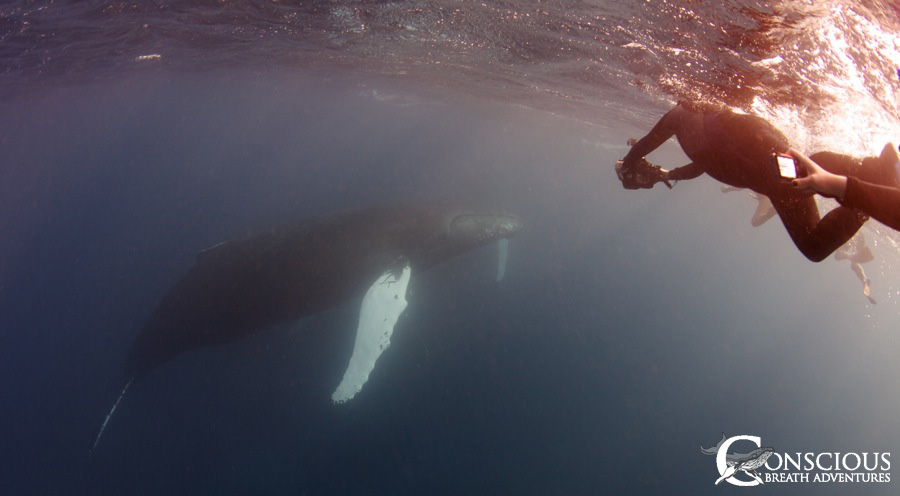 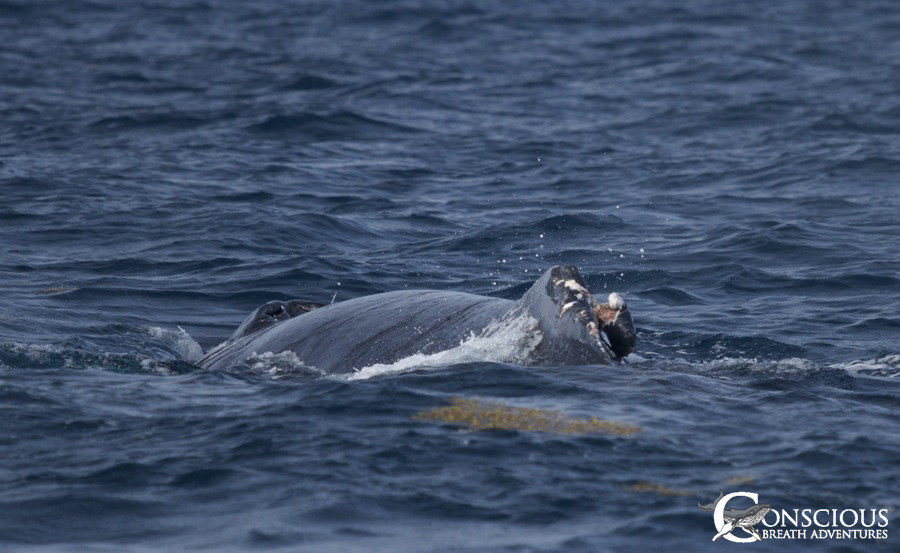 Thursday, January 31
Speaking of rowdy groups, this morning we came across a group of more than a dozen male whales vying for the attention of a female, a classic competitive group. What was especially interesting about this group was the big bull at the center of the fight, a scratched and scarred veteran of past battles. This old guy is so tough that his dorsal fin was snapped off and hanging by some skin, dangling down to the right (above). He didn’t seem to bothered, though, and he regularly trumpeted and vocalized as he powered along.
Later in the afternoon the weather temporarily turned for the worse again but we were able to stay out with the whales. And so, in the last hour of the week, we were treated to an assortment of highlights. First there was the vibrant rainbow shining over the reef (below), and for our last in-water encounter, we ended the week as we started it, with one group of guests swimming with a singer while the other group got a closeup look at two whales breaching repeatedly to the west toward the falling sun. What a sendoff! What will next week hold in store? 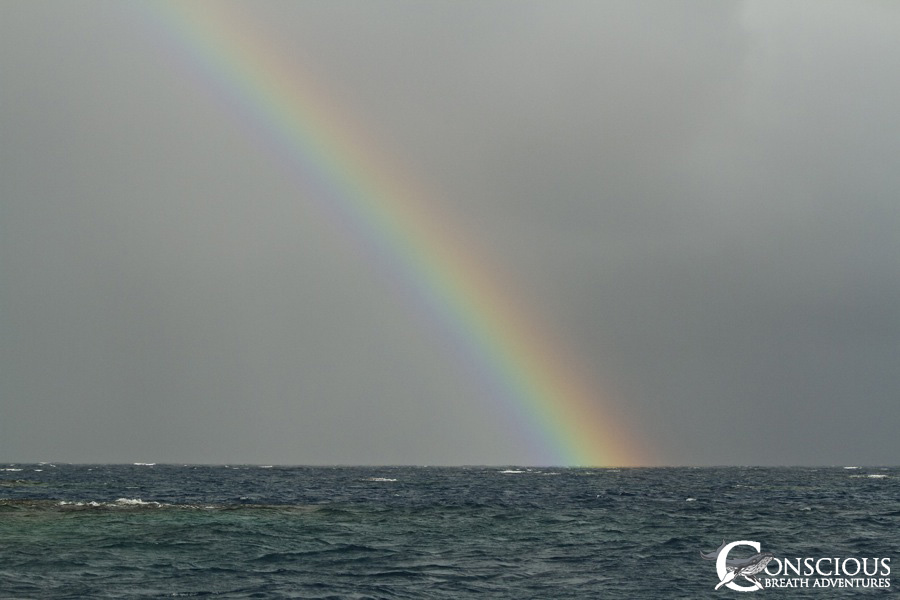