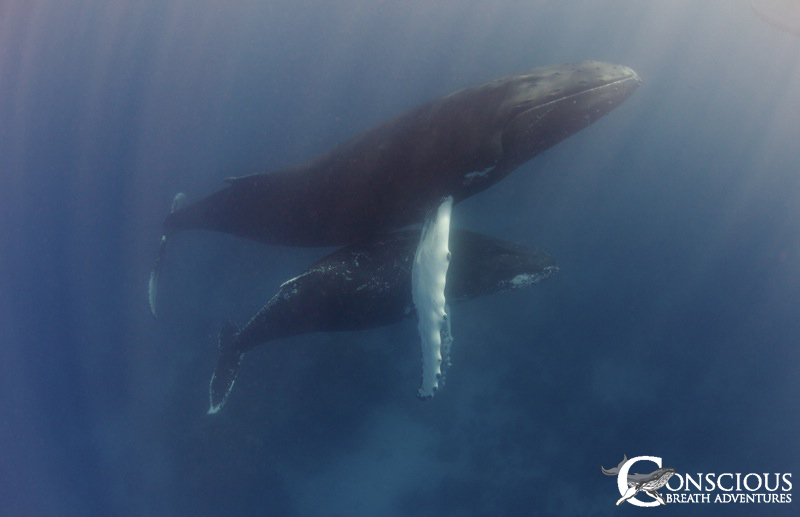 Sunday, February 3:
After a relaxed morning of preparations after our easy trip, we headed out after lunch to meet our cetacean friends.
Our companions for the first afternoon were a remarkable trio: a mother with a yearling child and an inquisitive escort. Typically we find mother humpbacks with their new calves, a few weeks to several months old, and mothers care for their young before separating some 10-11 months later. This mother had what appeared to be last year’s calf, a big affectionate baby of over twenty feet in length, that was all scratched and marked in white, probably from rubbing against the barnacles on mom’s chin and underside.
This pair was interesting all by themselves, but they were also accompanied by a curious escort who would circle slowly just below as we all floated quietly at the surface. 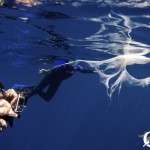 And to add to the unique experience of the afternoon, at one point a pale white blob of a viscous substance floated up from below. We believe it was a squirt of the mothers rich milk, with its very high fat content helping to make it buoyant. The milk was almost white but cohesive, swirling in the currents, and very slippery to the touch. We see mothers nursing on occasion, but this was an excellent chance for an up-close look at the main ingredient. 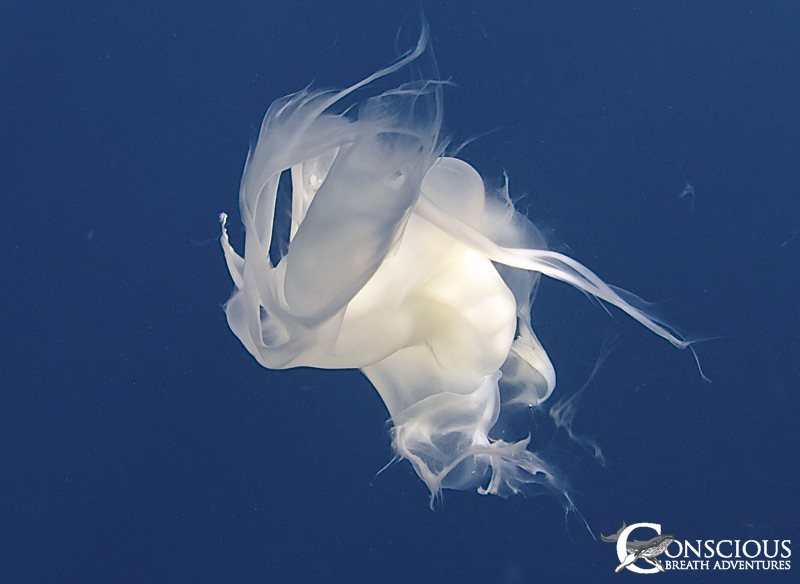 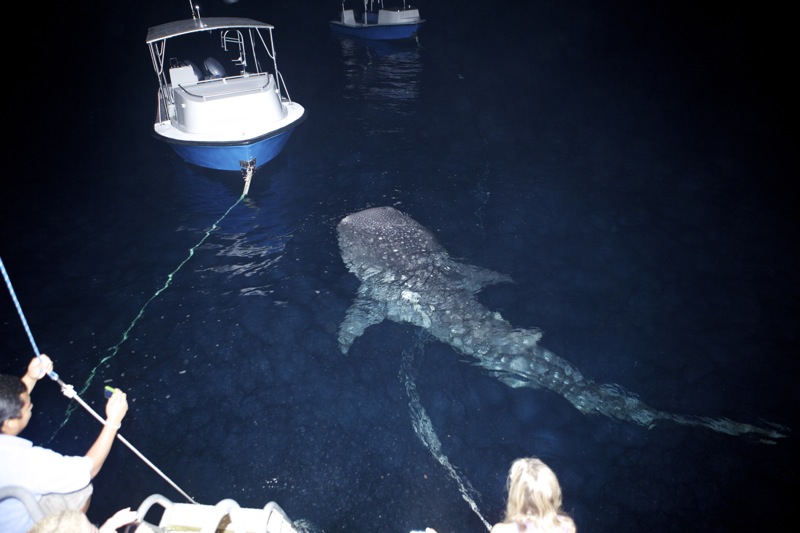 Monday, February 4:
Today was a full day with the action starting well before sunrise. At 4:00 AM I was roused from a deep sleep by the night watchman, Scooby, urging me to wake up, saying something about “ballena”, the Spanish word for whale. Hurrying up half asleep, I expected to find a humpback whale sleeping next to the boat, but when I looked where Scooby pointed I was jolted wide awake by the sight of a 15’ whaleshark feeding in the floodlights! While whale sharks do live throughout the Caribbean and tropical waters, they are not commonly seen and this is the first one I have seen on the Silver Bank in the 12 seasons I have spent here. During the next 25 minutes, all the guests and crew rushed out of bed and watched as this handsome fellow circled at the surface, mouth agape, feeding on the plankton drawn to the light, until he finally faded into the darkness.
We later learned that the whale shark visited the other boats in the anchorage that night, too. What a special treat! 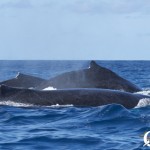 And the day just got better from there. During our morning excursion one of our boats was thrilled by the high energy excitement of a group of 10-12 male humpback whales, densely packed and fighting hard, as they competed for the favors of an available female. 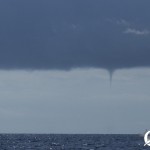 After half an hour of watching the action, I glanced back to see a growing storm cloud dropping four small waterspouts from its bottom. These marine versions of tornadoes can be dangerous to small boats but these never developed fully and the sun never stopped shining on us, so they were just an interesting backdrop to the morning.
During the afternoon’s excursion we had a lot of great whale watching  but not too many swimming opportunities, until late in the day when we came across a trio engaged in 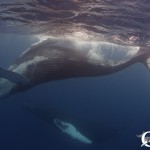 some surface behaviors: rolling, splashing, and spyhopping. After watching for a long time, they began to circle the boat and we slipped in the water. At first the three stayed just at the edge of visibility, but after a short while one left the scene and the remaining male and female pair approached much closer and began to dance! Dancing is when a pair of humpbacks are in the final phases of their courtship and perform an underwater ballet with each others, and when they are into it, for the swimmers, too. It is one of the peak experiences for whaleswimmers on the Silver Bank. In this pair, the male would twist and swirl and roll at the surface and then the female would come up from below and spyhop right next to him. They repeated the routine for well over a half an hour when the late hour and our distance from the mooring required that we leave the happy couple to dance as the sun got lower and we returned home.
As if this was not enough to end our first full day, when we got to the mooring we found that our friendly whale shark from last night was cruising the anchorage and everyone was having a swim with him! In the last minutes of the day, our guests had the chance to get a good look (that is how we know he is a he), just a couple hundred feet from the boat. It was the bonus highlight for a great day. 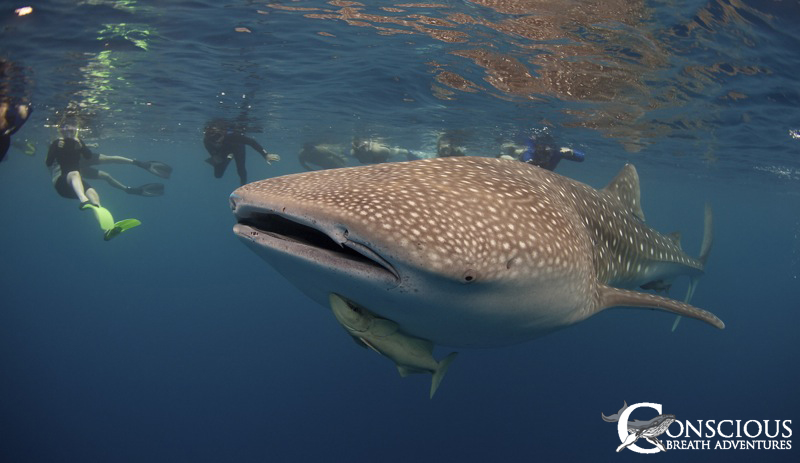 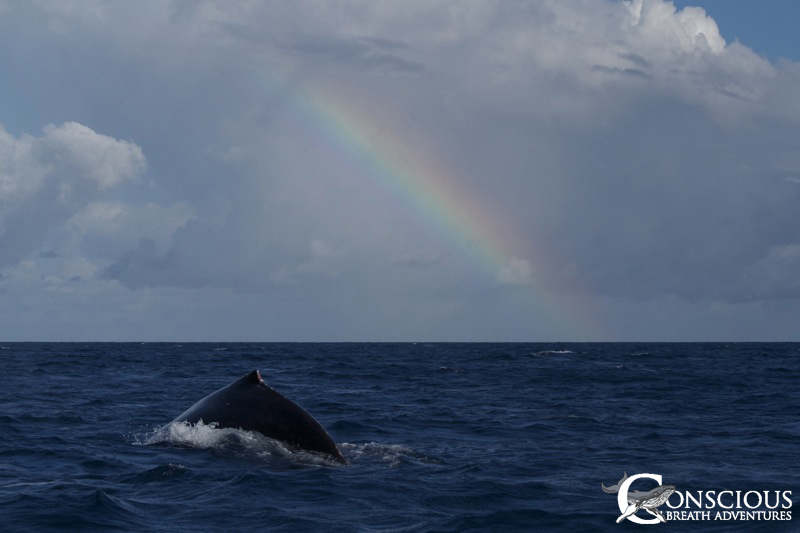 Tuesday, February 5:
This morning we enjoyed another show thanks to the whales and the weather when we followed a bunch of rowdy male whales against a cloudy and rainy backdrop, giving us the photo-op to photograph the whales under a brilliant tropical rainbow. 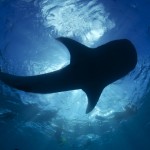 At lunchtime we saw our whale shark buddy again and everyone was able to have another swim with him. He also was circling the M/V Sun Dancer II on and off during the night, coming so close to the dive platform at the stern that we could have reached out to touch him. He seems curious about people, often turning toward swimmers at the surface, giving us all a very close look at the distinctive pattern of dots running the length of his body.
During the afternoon excursion one of our whale boats came across a resting mother and her energetic calf. While we watched, it breached more than 80 times! Finally, after it stopped for a rest, we were able to get in and see mom and calf together, and quickly observed that the mother had distinct scars and healed cuts on her pectoral fins and fluke from an entanglement at some time in her past. Unfortunately, this is all too common as entanglement is one of the top killers of cetaceans worldwide. 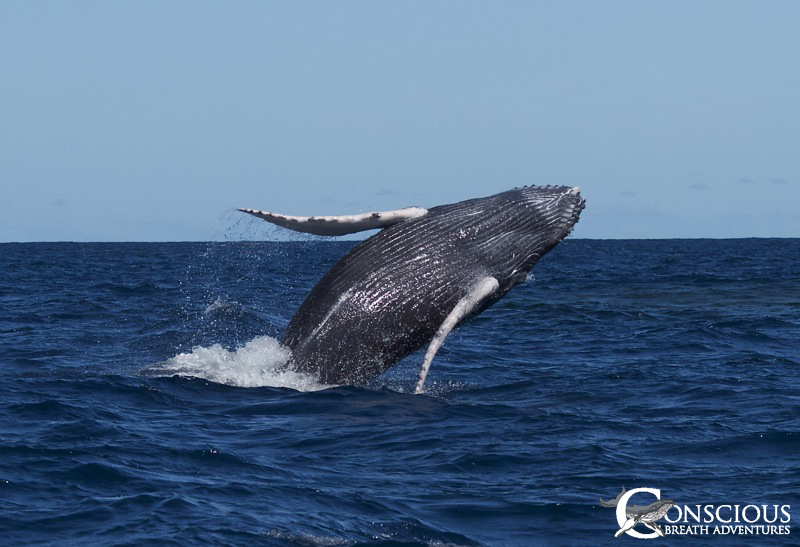 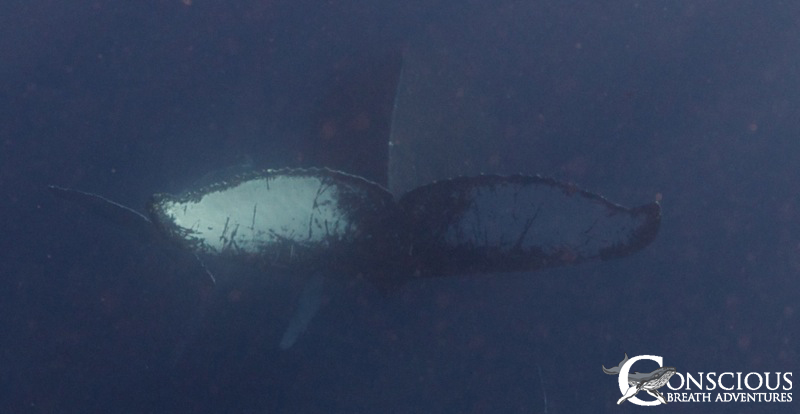 Wednesday, February 6:
Our friend the whale shark was around the boat again for hours during the night, slurping plankton under the lights as he swam slowly into the current. It clearly has figured out that boats plus lights equal food, so the open question now is: how long will he stick around?
Later this morning our boat found a mother and calf resting in the reef and soon recognized them as the breaching calf and entanglement-scarred female from yesterday. We had a nice swim with them and were able to get this photo of her fluke to see if she can be identified. Do any of you Flukematchers out there know this mother or her story? Please let us know!
The whale shark was around the anchorage again during lunch, we are beginning to think of him like a big, friendly spotted dog!
The highlight of the afternoon was an extended swim with a pair of resting adults. As is often the case, they took little notice of us as they hovered below, but would make a turn for a closer look when surfacing to breathe. 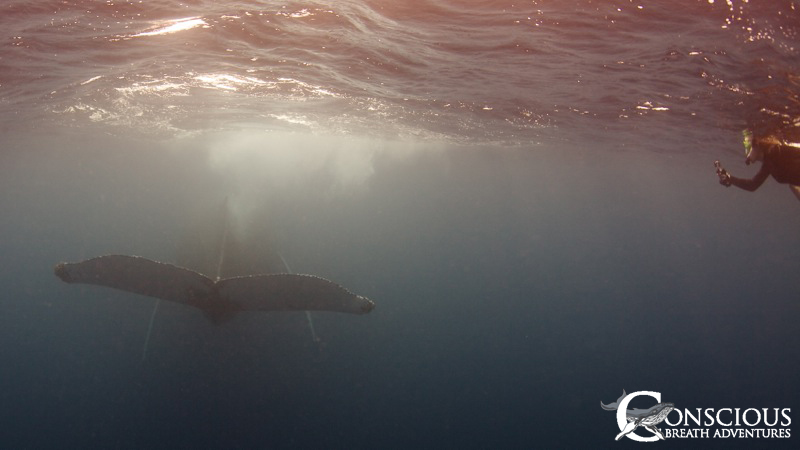 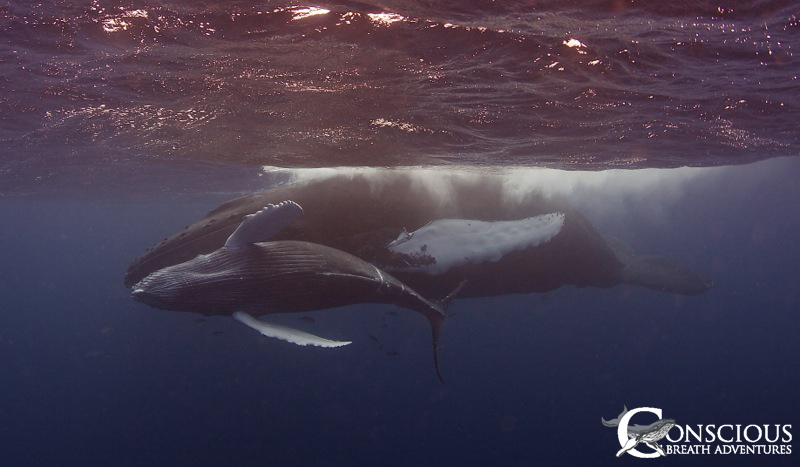 Thursday, February 7:
This morning we once again found the scarred mother and her active calf and had our best swim yet. It was easy to get a closer look at the healed wound on the back edge of her left pectoral fin, where a chuck of tissue had been cut away by some sort of rope. Mom was content to rest easily, sometimes logging at the surface while her calf played. This peaceful scene was interrupted when two male whales, a hopeful escort with a challenger already in tow, came cruising into the picture causing mom and calf to wake up and kick off.
Our last afternoon found each of our boats swimming with two different pairs of sleeping whales. Like yesterday afternoon, we were able to float, watching from above, for a long time. One of the males made the experience exciting when he spyhopped in front of us in the water to have a closer look each time he rose for a breath. 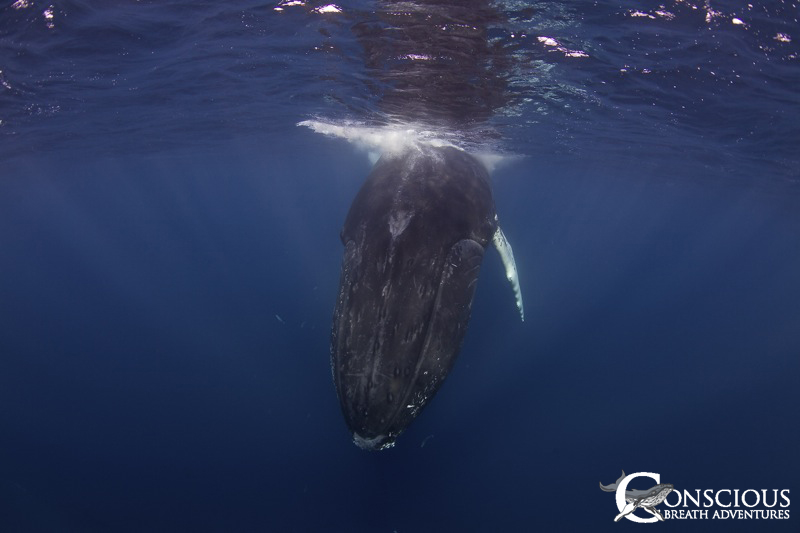