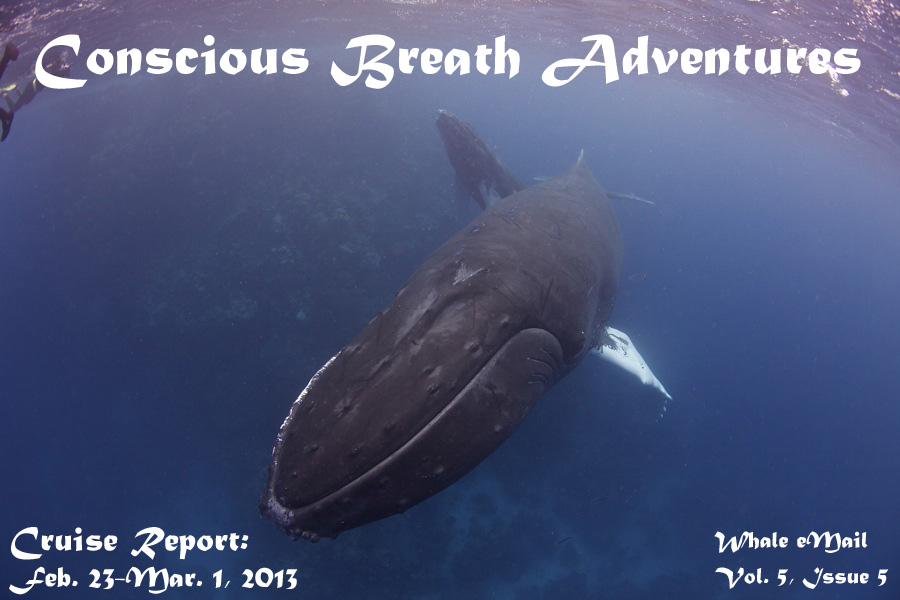 Welcome to our Cruise Report for Week 5 of our 2013 Silver Bank humpback whale season. We are at the halfway point now, this weekend, and as usual there is a lot going on here in our port of embarkation.
The biggest event of this weekend ashore is a crew change as our valued staff and very good friend, Capt. Jeff Pantukhoff of the Whaleman Foundation, concludes his tour here in the Dominican Republic. By the time we are done here on the Silver Bank in early April, Jeff will have concluded three excursions guiding supporters of the foundation to visit the friendly California grey whales in Mexico’s San Ignacio Lagoon and will be in Japan working diplomatic channels to stop the killing of dolphins in Tajii and elsewhere. Thanks, Jeff, for all the good times and for all your help this season. Safe travels!
Taking Jeff’s place will be CBA guide and naturalist Elisa Buller. Elisa is a scuba diving instructor, captain, photographer and videographer who has worked with spotted dolphins in the Bahamas, and humpbacks in Tonga and on the Silver Bank. Thanks for joining us again, Elisa!
Week 5 was an exceptional week with many stories to tell. We had a bunch of returning guests and many more fresh faces, folks from as far away as Holland , Alaska, California and New England. It was a fun group and they have a shared experience now that they will never forget. Let’s get started…
_____________________________________________________________________________________


Sunday, February 24:
With a happy mix of Silver Bank veterans and eager whale newbies we set out for the first excursion. Without a doubt, the highlight of the afternoon was a swim with a singing male humpback. We had seen the single whale dive down at a distance but did not know exactly where it was when we got closer. As we idled, waiting for it to surface, one of our returning guests asked, “hey, does anyone hear something?” The answer was yes, and soon we spent more than half an hour in the water, watching and listening, immersed in the music, feeling the vibrations as the song shook our bones.


Monday, February 25:
It’s been a bit breezy this season and today was no exception, but when you find the right whales in the right place, a little wind doesn’t matter, and that is exactly what we did.

There is an abundance of whales on the bank this year, giving us many opportunities. But today’s was a treat when we again located one of our favorites from last week, the mother we call TW and her playful calf.

TW and calf were every bit as awesome as last week and everyone got to spend plenty of time swimming with them as she rested peacefully at mid-water depths and her curious calf played, showing off for the swimmers.

TW spent much of her day in among the rocks that comprise the Silver Bank’s reef and we had a chance to inspect the coral, too. Unfortunately, most of the reef is not very healthy but sometimes we find signs of improvement, like this beautiful, mature stand of elkhorn coral (Acropora palmata). It does offer some hope for improvement with time. 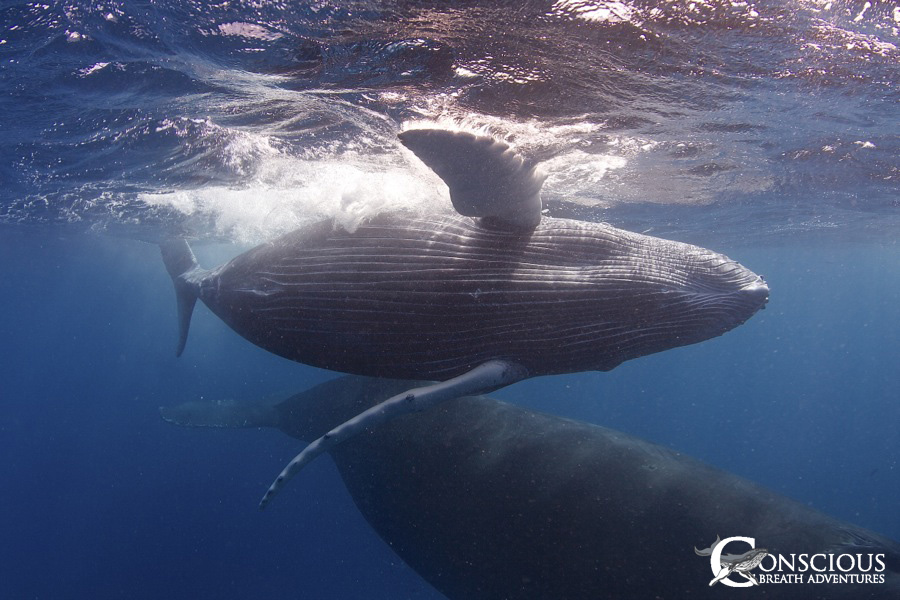 Tuesday, February 26:
Today found us in the same position as yesterday: swimming with TW and her calf among the reef on the Silver Bank. TW seems to prefer the protection of the reef and each of the times we have found her, she has been resting among the rocks.

Over the course of the hours the calf, who we have yet to give a nickname, cavorted enthusiastically, twisting and rolling and splashing at the surface. But sometimes she would take a little break to rest or even nurse, which we saw several times. Some of the swimmers even got the chance to feel some of the mother’s milk which was spilled. Unlike cow’s milk, whale milk is very thick and cohesive so it does not disperse quickly in the water. It’s very slippery to the touch, slimy and slick!


Wednesday, February 27:
We did not see any sign of TW today, but with the abundance of whales it wasn’t long until we found something interesting.
First for the day was a mother, calf and escort, but what was noteworthy was that the calf had a disfigured fluke and a large wound on its left flank. A close look at photos offers no clear answers. Possibly the tip of the tail was bitten off and was not healing well? But what caused the wound on the flank was impossible to guess. The calf was very interactive and playful, but since its physical condition was compromised we spent only enough time to photograph and document its injuries before moving on.
The stars of the show today were a mother and her calf, an escort and a fourth, smaller, whale that was too young to be a true challenger, the standard title for another whale imposing itself upon a male/female pair. These four whales were fun to watch, with mom resting, calf  playing, the escort occasionally patrolling around below to keep track of the “challenger”, who also circled around the perimeter of activity. Swimming with three whales is not too unusual, but four is a bonus-whale treat!
_____________________________________________________________________________________
Thursday, February 28:
As full as the week has been so far, nothing really prepared us for today. That is one of the magical things about being on the Silver Bank during the season: you just never know what the day will bring.
Up in the rocks we again found a familiar whale, the same mother and calf that we swam with on February 24th, a week earlier. This is the mother with the unusual habit of sleeping in an inverted position, with her belly facing toward the surface and the sky. Every time she would dive down after her breath cycle, she would glide to a halt, slowly twist her pec fins for leverage and gracefully roll right over on her back where she would remain until her next breath about ten minutes later. It was amazing! In the relatively shallow water of the reef, her white belly glowed like a beacon from above, and seeing her right herself to surface was reminiscent of watching a capsized kayaker right herself. And while mom engaged in this remarkable behavior, the calf played and their escort surfaced at close range, at ease, reflecting the female’s complete acceptance of our presence. Any one of these whales by itself would have been a hit on any day,  all three together was like a grand slam home run!