Sunday, February 17, 2013
Today began our fourth week among the humpback whales of the Silver Bank. We had a boat full of dedicated and soon-to-be whale-lovers including a group from the South Florida underwater photography scene; an adventuress all the way from Australia; a professional cameraman from Brazil, on location shooting for a German production company; and more. And get this: we even had one young lady who had never been on a boat before, and who had never seen a whale in the wild! Wow, what a way to start your whale watching career!
Our overnight cruise out from Puerto Plata was a little bumpy, but it was a classic start for our new whaleswimmers on the Silver Bank. Whales were everywhere to be seen during our final approach to our mooring and by the time we headed out for the afternoon excursion the wind and seas were down and the sun was shining brightly. It was a beautiful afternoon.
It didn’t take long for our boats to find a mother, calf and her escort relaxing nearby. After watching for a short while to assess their behavior before considering an approach, we slipped quietly into the water to begin what would be an easy, extended swim with the whales. Mom would rest for twenty minutes before coming up to breathe, logging on the surface in front of us; the calf would rise every five minutes or so and take a few breaths and cavort around; and every so often the escort would slowly circle and roll just below to have a closer look. Watching the social interactions between the whales gave everyone a look into a few hours in the life of the humpback whales, and with whales like these, the time really flew by. 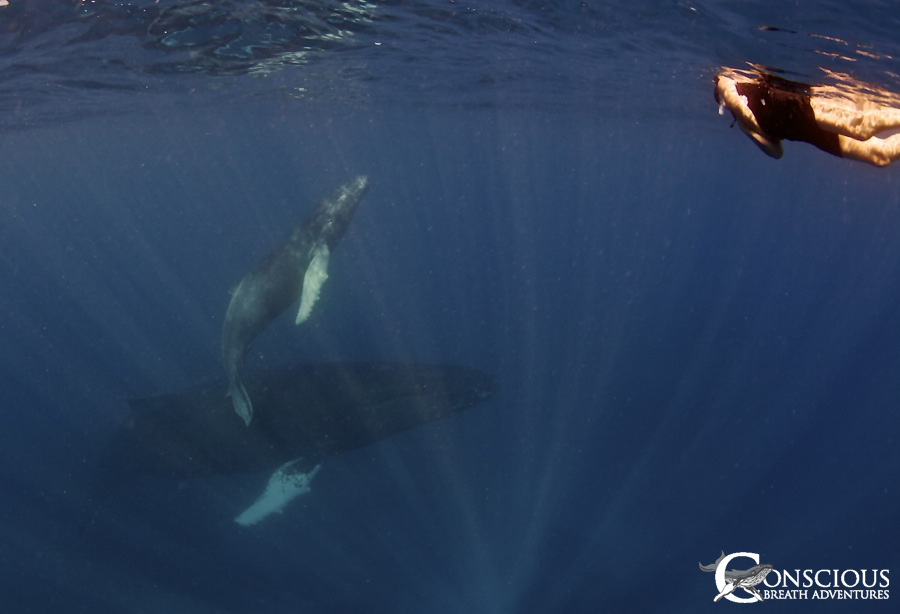 
Monday, February 18, 2013
It was breezy this morning but the extensive reef on the Silver Bank provides us a good place to look for whales in calmer waters. The protected waters are part of why the whales come here!
Little more than half an hour after starting the morning excursion, our whale boat,“Pec”, found a mother and calf resting among the rocks. After our standard observation period, with everything looking good, we entered the water for a closer look.
Mom and calf were resting peacefully, and it only took a few minutes to recognize that this mother was a whale we had swum with during the 2011 season, when she also had a calf. She was easy to recognize from the distinctive markings on her left pectoral fin which look like the initials “TW”, which is what we have called her since.
TW is an amazingly calm and easygoing mother. While she rested just below in the sixty foot deep water, we were able to watch closely as her calf, another pretty little girl, played and frolicked on the surface in front of the delighted swimmers. During the entire morning of swimming, TW never moved more than a few hundred feet, maybe a dozen lengths of her 35′-40′ body. At one point we were even privileged to watch the calf nurse from its mother, sharing a moment of ultimate mother/child intimacy.
Besides the identifying markings on her pec fin, TW has another interesting characteristic that we called her “leaky valve”, which she had in 2011, too. Most of the time she is underwater a thin stream of tiny bubbles escapes continuously from her blowhole, creating a string of glistening bubbles rising to the surface.
As we get to know these whales over time as individuals, it is amazing to learn their unique traits and personalities. TW has her leaky valve, just like in 2011, and the same totally relaxed demeanor as in that past encounter, too. Like last time, she seems to prefer resting in mid-water, not too close to the bottom, and barely moves a muscle when she rises for a breath. Both times we have seen her we were within just a few hundred yards of the mooring and she never moved much farther than that on either day. We sure hope to see her again later this season!
_____________________________________________________________________________________
Tuesday, February 19, 2013
Today was an exciting day for watching whales. The morning’s highlight was a thrilling display of pec-slapping and lobtailing between a single female, her escort and two male challengers. We watched closely as they slowly zig-zagged through the reef while the male whales jostling for position at the female’s side, even approaching closely to challenge the boat at one point, mistaking us for another challenger. The escort was easy to recognize from the distinctive rake marks on his dorsal that were the result of some past incident with one or more orca.
Later in the afternoon our boats were out and about and found a pair of adult whales resting in a different part of the reef. We quickly recognized the pair as the female and her tooth-raked escort, settled in for a nap after the rigors of the earlier battle! These two whales shared their afternoon with us, the female resting peacefully, the escort occasionally circling below to have a closer look at the swimmers in the water. He was one calm, cool character, slow and easy in his movements, confident in his position. We eventually ended up with them just a few yards of the wreck of the Polyxeni, the Silver Bank’s iconic landmark.
What a fun day, seeing the behaviors change from a rowdy fight in the morning to a contented, accommodating couple in the afternoon.
_____________________________________________________________________________________
Wednesday, February 20, 2013
Another breezy day awaited us today and the whales we saw were mostly on the move. Our best activity for the morning was more surface shows, especially this calf which breached repeatedly for us, dozens of times, sometimes at close range.
In the afternoon we were able to spend some time swimming with a mother and her playful calf, too, satisfying our in-water itch quite nicely. This calf was yet another female, the little girls seem to be everywhere this year.
It has been a great week so far, and as the day drew to a close one of our guests, the adventuress all the way from Melbourne, Australia, commented at how remarkable the experience had been so far, saying that already she had seen 75% more whales than she had expected. With a week like this, I can understand her feelings! 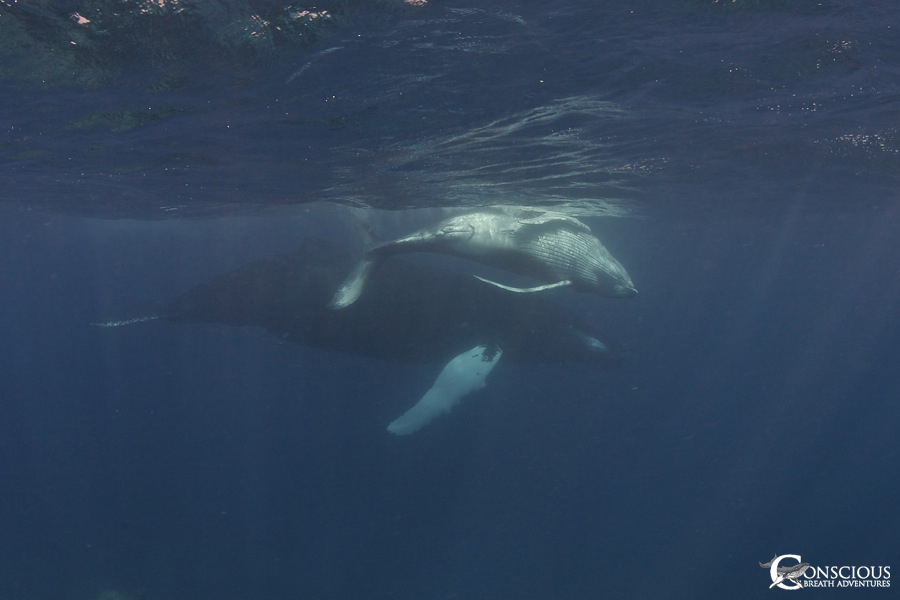