What is the Best Week to Swim With Whales on the Silver Bank?

“What is the Best Week to Swim with Whales on the Silver Bank?”

This is the question I am asked more than any other, without a doubt. I thought this post would be a good place to share my complete reply. If you are curious about the answer, please read on.  But if you are really short on time, I can share a spoiler: any week is a great week to swim with whales on the Silver Bank (but I hope you will join me here for a few more minutes…).

Before we dive in, it’s good to remember that the Silver Bank, part of the Sanctuary for the Marine Mammals of the Dominican Republic, is the key over-wintering and breeding location for humpback whales in the North Atlantic Ocean. With post-whaling numbers for the North Atlantic population an estimated 12,000-14,000 and rising, it is conservatively estimated that some 3,000-5,000 whales spend time in the Sanctuary each year (by contrast, only 600 or so human visitors make the trip, which gives some perspective on just how exceptional the adventure is). 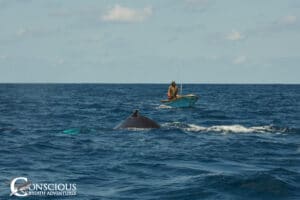 Every year, the humpback whales start arriving on the Silver Bank around the end of December into early January, and are in the area until the end of April and into May. We know this from anecdotal reports from local fishermen who work on the Silver Bank day-in and day-out, all year long (click photos for larger view). It’s also corroborated by whale watchers in feeding grounds such as the Stellwagen Bank and in transitory regions such as Bermuda.

Our eleven-week season begins well into this period. Our cruises start on the last week of January and end the first week of April (in 2022 our season runs January 22 – April 9). This is almost a month shy of what we consider “the end”. Our eleven week season is comfortably bracketed at the peak of the much longer time the whales are on the Silver Bank.

When folks wonder if the whales will be there yet, or will they be gone already, I can confidently say that the whales will be on location during our cruises. This is because the “shoulder weeks” of build up or decline in overall numbers occurs outside our typical schedule. Travelers have been visiting the Silver Bank to see and swim with the humpbacks for around thirty five years – twenty seasons for me, now. Over the decades these weeks have proven to be the most consistent and dependable dates for seeing whales and having great interactions.

Any Week is a Great Week

Now, while we know the whales will be there, there can of course be variations in activity. That is inevitable when dealing with wildlife and weather. But those variations tend to be more of the day-to-day or week-to-week variety and the precise conditions are impossible to predict months in advance. We have had early or late-season weeks that were filled with action and mid-season weeks, which most folks assume would be “best”, that are a bit less active by comparison. And vice-versa; you just never know for sure. But keep in mind that with so many whales around, even a “slow” week on the Silver Bank can still be pretty good!

The key point is that the Silver Bank is the largest breeding ground of the North Atlantic humpback, with thousands of whales in the wider area, and we are there at the peak of their season. We typically see dozens of whales every week, our guests see whales every day and swim with them on most days, sometimes several times in a day, regardless of the week. The itinerary is so dependable that the chances that guests will have a good, meaningful interaction in the water with humpbacks– not just a whale swimming in the general vicinity, but a mutually aware interaction – are, if not every day then on any given week, in the upper ninetieth percentile. This is not whale watching as guests may have experienced it before. This is spending quality time with whales while immersed in their home environment.

So, any week is a great week to be on the Silver Bank.

That said, there can be some broad differences between weeks in the types of behaviors occurring that we can talk about in general terms.

The Silver Bank is a major breeding ground where the single males and females come to mix and mingle to pair up and mate. When Conscious Breath Adventures shows up in January the early weeks can be like arriving at a hopping singles bar that is in full swing, with plenty of energy and action. Everyone is ramped up and ready to impress. So it is not unusual to see a lot of the spectacular surface social behaviors that humpbacks are famous for, such as breaching, pectoral fin slapping, lobtailing (tail slapping) and more, as they play the mating game. It is a fantastic show to watch and photograph as we look for more appropriate whales to swim with.

Later in the season the ratio of single males to females can change as individual females successfully mate and begin to migrate north. But the males will stick around until closing time, still hoping to find a mate, leading to larger groups of males competing for the remaining available females. These are the powerful “rowdy groups” that are one of the most exhilarating of all behaviors to behold. A rowdy group can include up to two dozen whales or more with the competition lasting for hours. It is hard to adequately describe the high-energy thrill of being in the middle of many hundreds of thousands of pounds of testosterone-fueled bull humpback whale as they battle for dominance and the chance to win a mate. This is the ultimate running of the bulls.

In addition to the singles, throughout the whole season there are the mothers and calves. While the singles mix it up, the females that were impregnated the previous season return to give birth here or someplace near here. Mothers resting with their calves can be one of our best opportunities for interactions all season long, with highly intreractive curious and playful calves. But while the whales may (or may not) start to leave toward the end of our season, the calves we see in later weeks tend to be bigger, older and bolder, and their mothers more relaxed with them, so we can have some very memorable experiences in later weeks.

The Sun and Weather 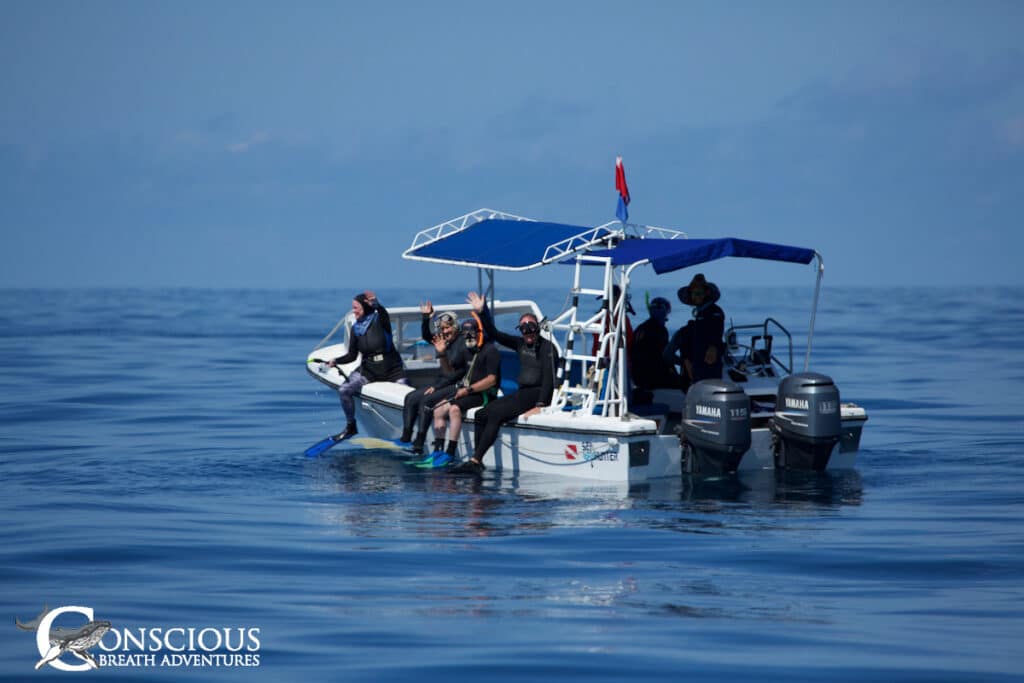 Another consideration is the weather and sun’s schedule. Later in the season the water is warmer, around 80F (27C) or sometimes more, and the weather tends to be more settled as winter transitions into spring. It is still possible to have a powerful late-season cold front that kicks things up but they are much less likely in late March and April (we can also have flat calm days in January, too – see photos from Jan 2020). Also, there is about a half hour more daylight each day in April when our season ends than in January when we start. Since our daily schedule revolves around sunrise and sunset, longer days mean more time to be on the water and more opportunities to encounter the whales. It may seem subtle but, like overtime pay, it adds up in a good way every week.

Every Week is Different

One important point in closing is that there is a lot happening on the Silver Bank during whale season, every week. Guests can see any or all of these different behaviors on any cruise (watch them here), expect to see whales daily and swim with them on most, regardless of dates. The differences can be subtle and I offer these explanations when asked, but it is not a clear-cut thing at all. No two cruises are ever the same and there is always something memorable that happens – you just never know what it will be until it occurs. That anticipation is what keeps some folks coming back over and over on what most people consider a once-in-a-lifetime journey. If a guest is impressed enough to make a second visit they are very likely to make a third visit or more. They can’t help but wonder: if I saw so many different exciting things on my second cruise than I saw on my first, what will I see on my third – or fourth? So beware: swimming with the whales can be an addictive hobby. Because the Silver Bank truly is an exceptional place – and the whales so very awesome – every single day. 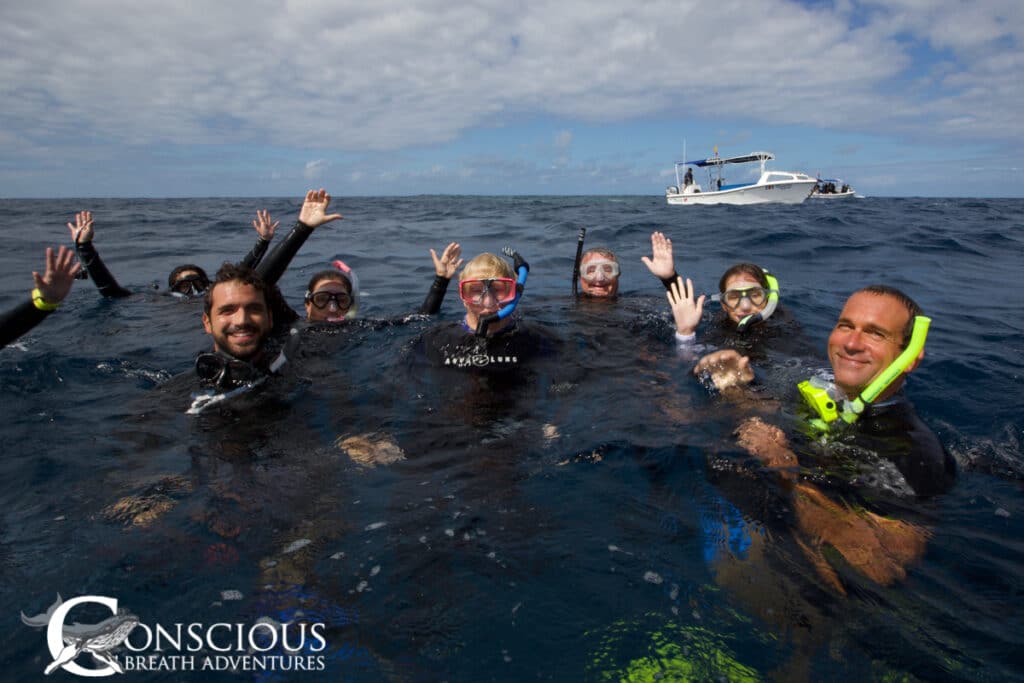