So far in this series on what humpback whales eat, we have covered the various small fish that make up nearly 50% of the diet of humpback whales; menhaden, herring, sand lance and capelin. The other half? Krill.

In simple terms krill are critical for whales. For some species, including the largest animal on earth, the blue whale, it is the only thing they eat. 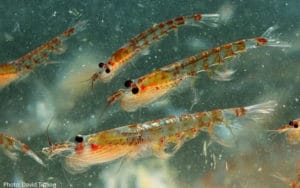 But most people know little about them. Despite being a keystone species in the Antarctic and so important for whales and other charismatic marine animals, they themselves are small, skinny, pink, shrimp-like creatures. As individuals they are not particularly awe-inspiring. But en-masse you begin to understand their significance. Stephen Nicol, in his book, ‘The Curious Life of Krill’, wrote “I like krill — and there are only a handful of people on the planet who can genuinely make this claim.” Nicol, from the University of Tasmania, has dedicated his life to researching krill and they really are a fascinating component of our oceans. I have many interesting factoids on krill that might encourage you to join their fan club too. But first, what exactly are they…?

Krill are not fish, not even vertebrates, but are a small, pinkish, translucent, 2” long crustacean closely related to shrimp (they’re in the same super-order – Eucarida, but a different family – Euphausiacea). Unlike their better-known shrimp cousins, krill are pelagic animals, meaning that they live in the water column (not close to the seafloor).

There are over 80 species, living in all oceans of the world. In Antarctica, one of the greatest in number and significance is Euphausia superba, the Antarctic krill. They live around 5 years (but as many as 10) in vast swarms and migrate vertically in the water column following their food. To eat, they comb through the water with 5 pairs of feathery feeding legs catching small algae-like diatoms and dinoflagellates (see image). These single cell oceanic plants follow the sun, rising up to photosynthesize in the daytime and sinking deeper at night. Krill gobble them up and, with full bellies and clear bodies, appear green when they are full of algae.

Following on the heels of the algae and krill are numerous other marine animals. They include not only humpbacks and other great whales but also species like albatross, penguins, squid, seals and many fish.

Here are some Amazing Things You Should Know About Krill:

Krill are among the most abundant animals on earth. They aggregate in huge swarms, visible from space at over 20 kms long. Females can lay up to 10,000 eggs at a time which sink and hatch in deep water; (700-1000m). Swarms of krill can number up to 30 trillion individuals. That fact alone is jaw dropping.

Euphausia is Greek for ‘true shining light’. They have blue light-emitting organs over their bodies that flash for a few seconds, possibly to deter predators. And their eyes can tell us how old they are. After 50 years of research, scientists just recently learned how to age krill by counting the rings in their eye stalks. Also unique to krill is their method of growth. Like other crustaceans, when they grow they molt (shed their skin) and grow a new, larger one. But amazingly krill can also downsize. So when food is scarce they can get rid of the skin that no longer fits them, one of the only animals in the world able to do this.

A keystone species is a species on which an entire ecosystem depends – in this case the Southern Ocean. They are so vitally important in Antarctica that concern about them led to an international treaty, the Convention on the Conservation of Antarctic Marine Living Resources (CCAMLR). The food web of the Southern Ocean is a classic in ecology: the oceans are limited in iron so whale poop, which is 10 million times more concentrated in iron than seawater, fertilizes growth of phytoplankton. These algal blooms drive krill numbers up and thence provide more food for the whales. In a beautiful study of resource partitioning, we have also learned that different whales target krill of different sizes. Fin whales prefer the larger ones (45mm) humpbacks the smaller, (35mm) and minke whales favored a size between the two. And so it goes…

Because so many other animals depend on krill, ocean managers need to understand how they are doing. Recent research has shown a concerning decline linked to climate change. As the oceans warm, the balance of dissolved chemicals is changing and water is becoming more acidic. This makes it harder for phytoplankton to grow and so diminishes the krill’s food source. Ice loss, along with the algae on the underside of ice floes, which sustain krill in the winters, is also a factor. To keep an eye on populations, scientists have come up with a novel methodology involving an animal whose day job is hunting down krill – chinstrap penguins. By strapping a camera to a chinstrap penguin researchers can get a close up view of krill stocks and better understand their status.

Krill are harvested primarily for animal feed and essential fatty acids (like Omega 3 oils). Indeed, it has been the target species for the largest fishery in Antarctica since the 1960’s. In medical science much work has been undertaken and is still underway to learn about the various maladies krill oil may cure. The anti-aging and tumor suppression qualities of krill oil are often talked up and the fishery is likely to expand, aided in part because melting ice makes new parts of the Antarctic accessible to harvest.

Of all these amazing facts about krill, I think the one I like the most is how they got their common name. While some sources say it’s from the Norwegian word for small fish, I prefer this one – the sound they make pitter-pattering on the ocean in their surface swarms. It was described by krill expert Stephen Nicol as “falling back like a shower of pink raindrops.”

If none of the above impressed upon you the critical importance of these fascinating creatures you might be surprised to know that they are arguably more complex than we are. While still not completely understood, the krill genome is a full order of magnitude larger than the human genome. Much work has yet to be done on how, given a lot of evolutionary building blocks, krill might adapt to a changing ocean. Let’s hope we can address climate change at a rate that allows them to keep up. 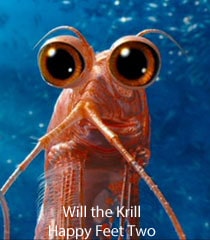 Like many of the species that humpbacks eat, krill alone are not typically celebrated. They don’t invoke the oohs and aahs of more charismatic animals. But that is more than a little unfair when you take the time to dig in and see how amazing they really are. I hope this has opened your eyes just a little. Thank you for reading our series and giving some airtime to the often unsung animal heroes that sustain our beautiful whales.