The Sex Life of Humpback Whales 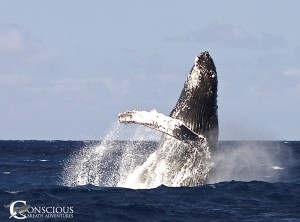 Last week we covered female aspects of reproduction in humpback whales, let’s turn our attention now to the boys.
The calm, protected, remote waters of the Silver Bank are an ideal location for North Atlantic humpbacks to give birth and spend the winter before heading to colder, but food-rich, northern waters. It’s also the winter hang-out and the place where gene pools mix, mates are selected and quite probably, though not yet witnessed, babies are conceived.
Some of the key points and fascinating facts about the male side of reproduction in humpback whales follow (with apologies for the anthropomorphizing!)

Mating systems of humpback whales have been described as floating leks.

I first learned about leks in college biology with imagery of massive stags rutting and harrumphing in the tundra and passive females picking the loudest, biggest sperm donor. Interestingly, humpback whales are not dissimilar; males display and compete for females, though of course in the open ocean. Terrestrial leks are very distinct with males maintaining their own space. There’s no evidence of strong territorial behavior in whales but one theory holds that the humpback’s powerful song  may play a role. However, whales do share the polygynous set-up – in other words, one male trying to mate with as many females as possible.

Some males do better than others.

Research on Pacific whales showed that while some males in the study did impregnate more than one female, the overall skew in paternity was small.  Humpbacks compete for females on a physical level, not through sperm competition as in other whale species like right whales. Evidence for this includes their relatively small testes, short penis and, of course the fighting….

Rowdy groups; one of the natural world’s most impressive sights. 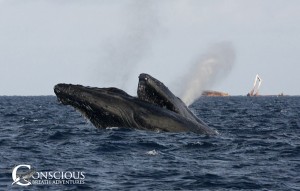 Ask my daughter about rowdy groups! Her first afternoon on the Silver Bank, at 5 years old, is forever etched in the memory banks as we witnessed a dozen or so whales in fast, furious pursuit of a female. The term ‘rowdy’ is somewhat of an understatement. They are not just jolly and loud – it’s a full-on war! We literally saw battle-worn, bloody males wearing the scars of these furious competitions. Whales will try and hold each other underwater and repeatedly lunge at each other, busting up their tubercles (the knobby lumps on their heads) and dorsal fins  in the process. When females are part of the groups, they are referred to as the nuclear animal and clearly the purpose is “may the best man win!” 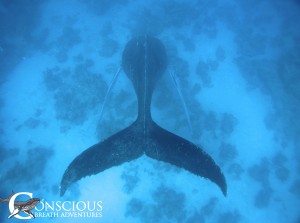 A mesmerizing enigma – the singing whale.

The song of a humpback whale is one of nature’s most amazing behaviors. They are not fully understood, we know there are distinct tunes and because it is mostly the males singing, the purpose, it is thought, must be a sexual display – related to attracting a mate. But to what extent is still unclear. It may also be related to establishing territory, as is the case with many species of birds.

Body size that is. Recent research from Hawaii provided the first quantitative evidence that large female humpback whales tend to hang around with large males. Large males were less discriminating; they’d be seen with more petite ladies, and if you’re a smaller male, looks like you don’t waste time with the big mamas but stick to girlfriends more your own size.

Humpback whales from Norway to the Gulf of Maine convene on the Silver Bank each winter. Several distinct North Atlantic feeding groups have been identified, merging in this one area to mate and breed. However, research has shown that males tend to arrive earlier and that sub-populations with farther to travel arrive later and leave earlier. The extent to which groups inter-breed is unknown and these timing discrepancies could mean less gene mixing than expected. More research is needed, particularly on winter breeding grounds, to better understand the population structure. 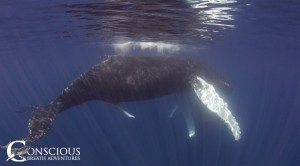 And, because I think some might ask: “The volume of humpback whale ejaculate delivered to females during copulation is not known.” Craig et al, 2002.

Unlike dolphins, there is no evidence that humpback whales have sex for fun. Remember, no one has seen it, on the Silver Bank at least. It could happen at night, or even on the trip south. Plus the energetic cost of semen production is high. Research has shown that males in breeding areas are less likely to hang with females who are nursing or with a calf – it’s a ‘waste’ of their time. (Although towards the end of the season with fewer females to choose from, they do appear to get less picky.) In an interesting study in Hawaii, scientists documented penis extrusions of humpback whales and found that they keep it to themselves, so to speak. Only 13 observations in videotape of 630 different pods over five years were documented. All were brief and in different circumstances.
Like this last research example, we find that the mating and breeding system of humpback whales is unique, very interesting and still quite mysterious. And the more we know, the better equipped we are to manage their habitats and ensure populations remain healthy. So thanks to all researchers contributing to this fascinating topic and thank you for reading!
References and further reading:
Male mate choice and male–male competition coexist in the humpback whale (Megaptera novaeangliae). Craig, A.S., Herman, L.M., Pack, A.A., Can. J. Zool. 80: 745–755. 2002
Segregation of migration by feeding ground origin in North Atlantic humpback whales (Megaptera novaeangliae). Stevick, P.T., Allen, J., Berube, M., Clapham, P.J., Katona, S. K.  J. Zool., Lond, 259, 231–23. 2003
Size-assortative pairing and discrimination of potential mates by humpback whales in the Hawaiian breeding grounds.  Pack, A.A., Herman, L.M., Spitz, S.S., Craig, A.S., Hakala, S., Deakos, M.H., Herman, E.Y.K., Milette, A.J., Carroll, E., Levitt, S., Carley, L., Animal Behaviour , Available online 23 August 2012 athttp://www.sciencedirect.com/science/article/pii/S0003347212003326
The social and reproductive biology of Humpback Whales: an ecological perspective. Clapham, P. J., Mammal Review, 26: 27–49. doi: 10.1111/j.1365-2907.1996.tb00145.x 1996
Penis extrusions by humpback whales (Megaptera novaeangliae). Pack, A.A., Herman, L.M., Craig, A.S., Spitz, S.S., Deakos, M.H., Aquatic Mammals, 28.2, 131-146. 2002