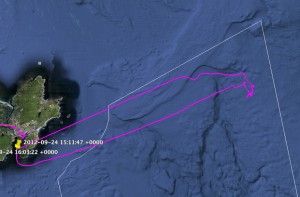 In the late spring of each year we bid farewell to our winter playmates as the humpback whales of the Silver Bank depart for the cooler but tastier waters of the North Atlantic. After fasting for several months in the tropics, they spend the summer months feeding furiously, many in parts of the Gulf of Maine on Jeffrey’s Ledge and waters near Boston and Cape Cod, part of the protected Stellwagen Bank National Marine Sanctuary. This week Capt. Gene and I finally got to check out their summer home the way thousands of visitors to New England experience whales: on a whale-watching trip from Gloucester, Massachusetts. It was a great day! Here’s what we learned, contrasted to the wintertime experience, and some highlights from our day on the water.

It’s relatively late in the season up here, over the next month or two humpbacks will start heading south where we join them in January. But one thing was abundantly clear from the behaviors we saw: their only objective is to eat, and they are sticking to it. Our boat encountered a humpback whale shortly after arriving on Jeffrey’s Ledge and on surface intervals, accompanied by the slight list as guests shifted sides on the boat, she took several deep breaths, rested just a few seconds and dived deeply. Gene noted that on every dive she fluked up, indicating the start of a deep dive. Beth Klinefelter, our naturalist from the Whale Center of New England, explained that the whale was deep feeding on fish below (we did not know what species), and could be using one of a variety of methods to corral her lunch; most likely mackerel or herring. While some of the more showy behaviors that make humpback whales so fun to experience are evidenced in the Gulf of Maine on occasion, today was a fairly serious food-fest.

Our five year old woke up for this one (she sleeps on any moving ocean-vessel on the water, be it a stand-up-paddleboard or a 60 foot trawler). Further evidence that the whales are actively eating and of course digesting came early in the day when a dive by one of several fin whales we saw was preceded by a large orange-brown smear of waste at the surface. This is one activity we do not often witness on the Silver Bank!

It was great to see several marine mammal species on the trip. Our first sighting was a fin whale – the second largest animal on earth and in addition to several humpback whales, we spotted a minke cruising close to shore on the way back in. And after her long nap, the little one added another species to the list when she saw ‘a head pop up’ and we identified a harbor seal hanging in Gloucestor’s busy harbor. Hopes were high, but not realized, for a sperm whale. These are rare but an apparently recent occurrence in the region and other species commonly seen include sei whales, pilot whales and several species of dolphin.

4. The whales are so close!

The proximity to shore of so many amazing whales is striking. Both Jeffrey’s Ledge and the Stellwagen Bank a little farther south are located just a few miles off the coast of Massachusetts, making them easily accessible on a half-day trip. This is a marked contrast from the Silver Bank, which, at 80 miles offshore, offers a true sanctuary for the whales but does dictate that any visit to their breeding areas is a week-long commitment. On our trip we had cell phone connection and could see land for the duration. Amazing to think there is so much going on underwater just a stone’s throw from the business of big-city Boston.

5. A Who’s Who for humpback whales

The easier access and presence of several research institutions and NGO’s in New England means a lot more data is available on specific whales in the area, compared to the Silver Bank. In addition to the largest catalog of North Atlantic humpback whales in the world, curated by Allied Whale at the College of the Atlantic, other entities such as the Whale Center of New England who were present on our trip, maintain active photo-catalogs on-board for immediate identification. A fluke photograph taken of the first whale of the day was matched as Follicle, a female first seen in 1998. The photo-ID work is important as scientists try to better understand populations and life cycles. And we’ll certainly be looking out for Follicle on the Silver Bank, hoping to spot her with a calf next year.

Our biggest surprise of the day, although in retrospect it probably shouldn’t have been, was the sheer number of buoys, markers, gillnets and lobster traps. Wherever you looked, there they were. It seems somehow incongruous for a marine sanctuary to support commercial fishing but obviously it’s a big subject with a long history and the region’s fisheries have many things going for them not least of which is active management. But entanglement remains a major issue of concern for cetaceans. Our naturalist explained that most of the buoys we were seeing marked gillnets, floating in the water column to catch whatever might swim by. Efforts to make them safer for whales have included requiring fishers to use lines that sink if dislodged, reducing the threat of ‘ghost’ fishing. But, perhaps inured to the phenomenon, she told us that about 40-or 50 entanglement situations were common each summer with 10 or so severe cases. Unfortunately, we have seen the results of this even as far away as the Silver Bank.

Superb weather; cloudless sky, minimal breeze, calm seas, a beautiful New England Fall day, which could not have been better. Nor could our wonderful hosts: Captain Bill’s Whale Watch with Captain Mark Buotte and on-board naturalist Beth Klinefelter from the Whale Center of New England. This non-profit, located next door to the boat’s office, is home to a humpback whale skeleton and some excellent educational materials. Staff and interns work hard to document whale activity in the area as well as educating whale-watchers through the boat based programs.
And to round out a great day? Chowder and a beer, of course! It was lovely and we’ll definitely be back. Captain Bill's Whalewatch, Fin whale, Gloucester, Harbor seal, Humpback whales, marine mammals, NGO's, Stellwagen Bank, whale, Whale Center of New England, Whale watching
« Prev Post
Next post »

Hi Gene
I can’t believe you werre up here! Iwason The Prince of Whales that same day and we spotted 30 fin whales,and 9 humpbacks, of course minke’sporpoise,seals and some Northern Gannets. Next time come out with us,we would love to “host” you and your family. We had “Tornado” and her calf, this calf of her’s in so much fun to spent time with,as you know very curious and playful, this is her 7th calf. We have a couple of weeks left and we are done for our season October 14th is it for us, very sad.