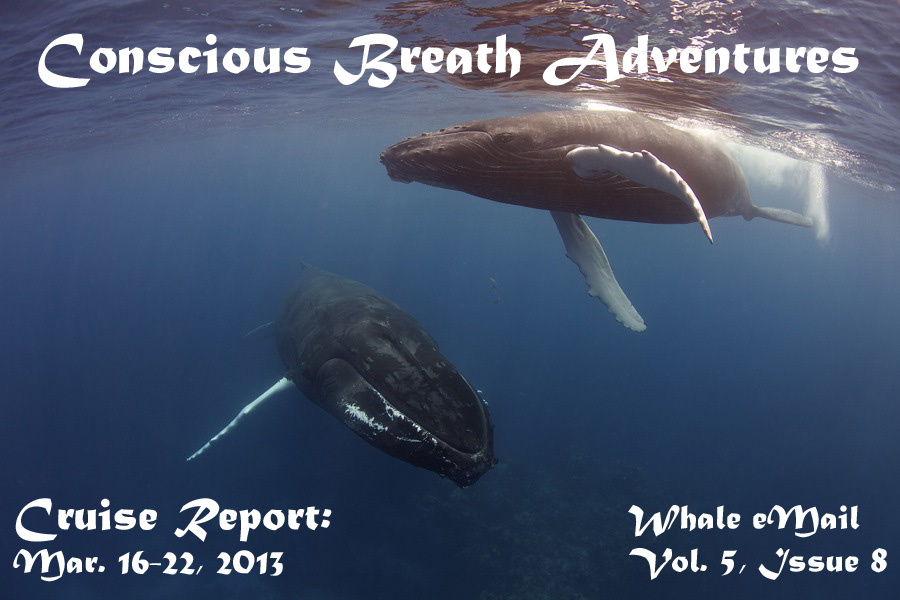 Sunday, March 17:
Our first afternoon of Week 8 had us out in our whale boats, Pec & Fluke, looking for friendly humpback whales. There were plenty of whales to be seen, with lots of mothers and their calves cruising around the Silver Bank. After a nice afternoon on the water we were happy to have a couple of green shirts come out at our daily Sundowner celebration, in honor of St. Patricks Day! Our wonderful guests this week included program directors from Harbor Branch Oceanographic Institute’s Marine Mammal Research & Conservation Center with whom I’ve had the honor of working for many years on long-term dolphin studies in the Indian River Lagoon, Florida. It was a pleasure to finally welcome them to the Silver Bank.
Later, after dinner, I gave our evening presentation, with tonight’s subject being humpback whale behaviors. One of the featured whales in the presentation is a humpback we have seen numerous times over the years which we have nicknamed Mystery Whale because she was not in any of the northern ID catalogs until our photos came along. Where does she spend her summers? Here on the Silver Bank she always seems to be engaging in some big, splashy behavior, fluke high in the air. And why do I mention this? Please read on…! 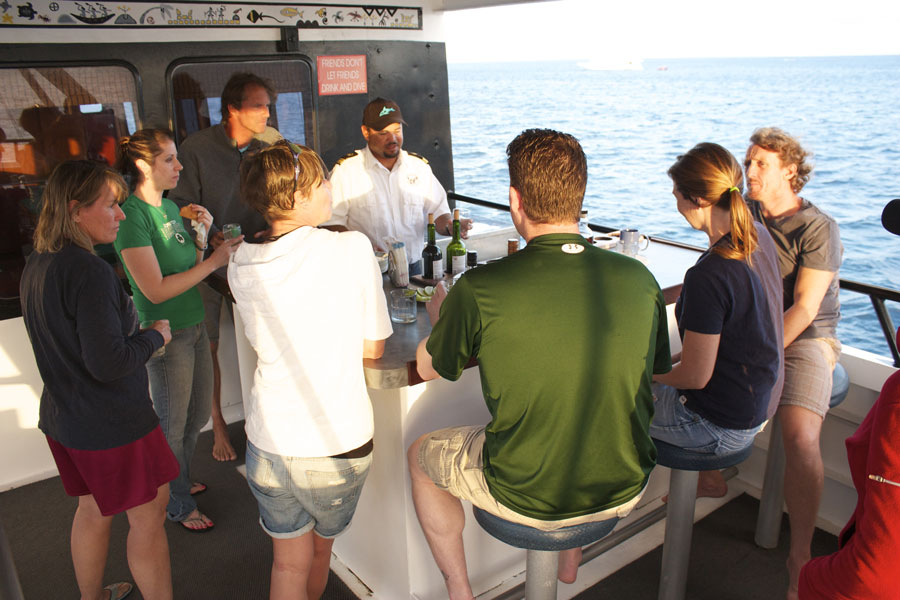 Monday, March 18:
The Silver Bank is literally swimming with whales, and that is what we hope to be doing, too! With all the whales out and about, there was plenty of topside action to see, including an exciting pack of around eight males competing for a female, a classic “rowdy group”; and this mother and her calf beating the water to a froth.
Our highlight for the day was a nice swim with a friendly mother and calf, but what made it remarkable was that the female was none other than our Mystery Whale, who I had talked about just the night before! We have seen and photographed her every season between 2008-2011, and now in 2013, this time with a calf. She is so well known to us here on the Silver Bank that her image, below, is even on my business card! It was fun to see her again and we will be watching for her later this season and next year, too. I’m thinking she needs a better name though! Any suggestions? 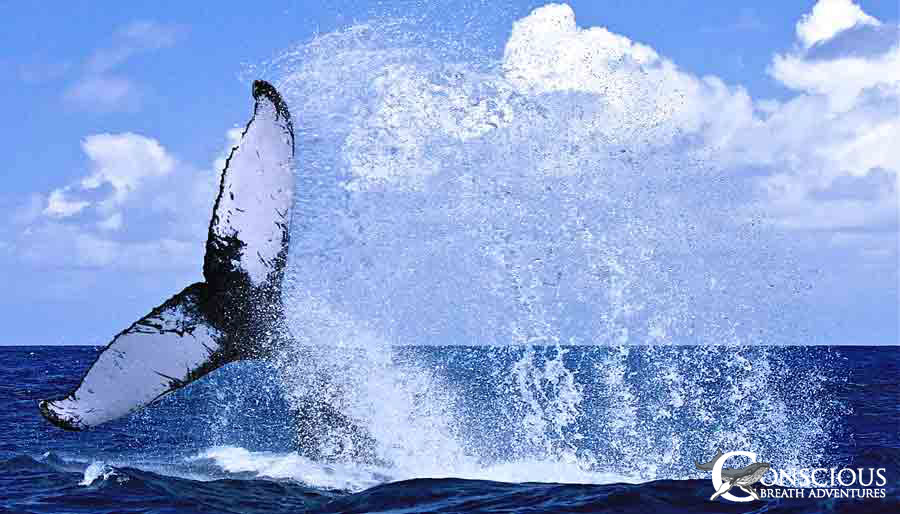 Tuesday, March 19:
This afternoon we had an extended encounter with a mother and her calf. There are lots of calves this year, and many calves, like this one, are females. This mother had an interesting marking, what looked to be a healing scar from entanglement, a mark like a bridle that ran across her back and down her sides around her girth just forward of the dorsal. We didn’t her nursing but did notice a viscous blob of fat-rich mother’s milk floating toward the surface.
Wednesday, March 20:
Today we had a visit with another old friend from earlier this season and years past, the mother humpback we call TW and her playful calf. TW is one of the most relaxed and peaceful whales we know, always snoozing contentedly ten to twenty feet below while her calf plays on the surface, with TW occasionally passing by for a close look at the swimmers when she surfaces to breathe. We spent much of the day in their company, even getting to watch the calf nurse heavily around lunchtime. All that rich milk is doing the calf some good, because she has grown noticeably since the last time we saw her earlier this season. It sure looks like she’s doing a good job getting ready for her first northward migration.

Thursday, March 21:
This morning the wind and waves kept us aboard the M/V Sun Dancer II but by the time lunch was over the conditions were rapidly improving and out we went to meet the whales.
We had a nice run with another bunch of rowdies that included an especially energetic escort fending off the challengers. This guy would arch his back, vocalize, lunge, and swoop around as he defended his position. It was easy to see that he wasn’t afraid to take a punch, as the tubercles on his rostrum were bloodied and raw from the struggle.
To wind down, late in the afternoon we snorkeled a patch of healthy reef that we know here, enjoying the calm seas and sunny skies.
By the time of our last Sundowner Celebration for the week, the Silver Bank was as flat as a lake and the winds dead calm. Hours later, after dinner, it was so calm we could hear a mother and calf in the distance breathing regularly in the moonlight. What a magical way to end the week!